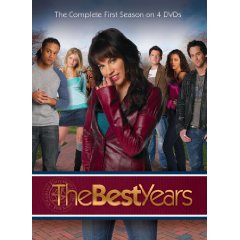 The Best Years follows Samantha Best (Charity Shea, Alpha Dog) as she starts her freshman year at the prestigious Charles University in Boston. Samantha has been shuffled through the foster care system her entire life and is finally looking forward to a future of new opportunities and friendships. She’ll have to contend with the ins and outs of college and mingle with a new world of “frenemies” as she struggles to find her own identity. Along the way she will meet new roommate Kathryn Klarner, (Jennifer Miller, Lucky Number Slevin), a rich socialite from one of the most prominent families in the mid-west; Dawn Vargas (Athena Karkanis, Saw IV), a child actor who has traded in Hollywood for college; and Devon Sylver (Brandon Jay McLaren, She’s the Man), a fellow scholarship recipient and star basketball player who has caught her eye. With her new dysfunctional family and a part-time job at Boston’s hot spot, Colony, Samantha must face the excitement and pressures of college life. It’s going to be a year to remember.

Obviously, the biggest problem is literally half the cast left the show last season (probably since the show was on hiatus for two years!): Niall Matter (Trent), Athena Karkanis (Dawn), and Brandon Jay McLaren (Devon). One of the most important things about the show is cast chemistry. Taking out half the cast is like separating peanut butter and jelly. It’s just not as good. I kept saying to the TV, “You’re not Trent! Bring back Trent!” It’s frustrating, because I’ve grown used to the old cast members and it’s hard to imagine seeing how the show is successful without them.
Movie Content: 7/10

o Episode 1: Vertigo
o Episode 2: Notorious
o Episode 3: It Should Happen to You
o Episode 4: From Here to Eternity

Fans of the show will be glad to pickup this DVD set as it provides all 13 episodes from season one. Enjoy this season as things change once the second season comes along as there are major changes which I wasn’t fond of.
Overall Rating: 9/10