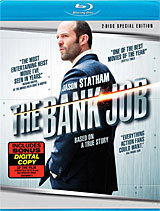 Jason Statham is in the same class action hero as Steven Segal and Jean Claude Van Damme for this era of films. Back in the 80’s we had so many A and B list action stars like Arnold Schwarzenegger, Sylvester Stallone, Steven Segal, and Jean Claude Van Damme. As we got into the 90’s their luster withered away and in the 2000’s Hollywood was looking for an action star. They tried with Dwayne ‘The Rock’ Johnson, but he went off and started making comedies and dramas. There was Vin Diesel, who suffered the same fate as ‘The Rock’ with the direction of his career. As we can see, we haven’t really had an over the top action hero churning out film after film here in the new millennium. I think that on a lower level, Jason Statham has quietly taken that honor. ‘The Bank Job’ is not one of those action films that many perceive it to be.
‘Lock, Stock and Two Smoking Barrels’ and ‘Snatch,’ were the 2 films that help put Statham on notice in Hollywood. While Statham has been in some good films like ‘Italian Job’ and ‘The Transporter’ films, he has made some dud films like ‘War’ and ‘Dungeon Movie’. Statham returns here to his roots with a good performance, good supporting cast, and a script that isn’t crap.

Jason Stratham plays Terry Leather, a crook that doesn’t get over his head on the jobs that he takes. Things are about to change when the beautiful Saffron Burrows shows up who plays Martine which is Terry’s ex-girlfriend. She has a plan for a huge bank heist that involves manipulating a lot of people. Stratham gets his associates involved so they can break into the British Security Service so they can get money, but little does Stratham know what lies ahead in a certain lock box. Not only do they have to worry about the local police, there are gangsters after the same thing and corrupt police that Terry didn’t figure into the equation.

The scenery and attention to detail is beautiful as this film takes place in 1970’s London. I love films where we go back in time and look at different eras. One of the reasons to why I love the first two Godfather’s, they cover periods that are interesting, but the recreation of an era long ago is just plain atmospheric. As I mentioned earlier, that I have grouped Statham as an action star. Many of his films have been very action oriented in nature, but ‘The Bank Job’ is a drama with action elements mixed in. If you are going in looking for a pure action film, don’t think that this is what you are going to see. ‘The Bank Job’ is filled with an overall plot, but there are many overarching subplots and a lot of dialogue heavy scenes. This is a film that won’t be for everyone, and I can attest to that with my wife not really enjoying this. One of the reasons I can also see turning people off is that this is a rather long film. Watching this film come together and the performances from everyone just gels together very well.

On the video side of things, this Blu-ray version of the film looks very good. The direction the director took here helps really bring out 1970’s London. The details are very sharp and clean on this print of the film. Anytime that you can see Stratham’s beard fairly clearly, you know that a job was well done, even though it isn’t at the level of ‘Crank’ where the image looked amazing being able to see each bristle of Stratham’s beard. The sound in ‘The Bank Job’ is very good and we get a DTS HD Master Audio 7.1 mix. Since this is a dialogue heavy film, the chatter is coming out of the center at a very nice level.

‘The Bank Job’ is a great movie and blew my expectations out of the water as I thought going in this was going to be a action film. Instead we got a more intelligent bank heist over a bank heist with crazy action. This film is not for everyone, so I would give it a rent, but for Jason Stratham fans he is at his best here in terms of acting, so give this one a shot.