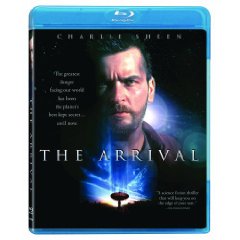 Calling this 1996 science fiction thriller “a glorified B movie,” isn’t a criticism. Writer-director David Twohy managed to get interesting material on the screen despite a limited budget, and the film is just believable enough to be satisfying as a tale of paranoid conspiracy. If you can ignore the hokey parts and accept Charlie Sheen as noted radio astronomer Zane Ziminski, you’ll get thoroughly involved when the reception of an alien radio signal leads him to Mexico and to a huge underground power plant operated by aliens bent on the eventual takeover of Earth. Ron Silver is suitably chilling as the astronomer’s boss, whose real identity is more horrifying than Ziminski ever imagined. The underground alien lair is memorably creepy, and Twohy’s film is just smart enough to qualify as more than a guilty pleasure.

‘The Arrival’ is a little known science fiction thriller that arrived in the early summer of 1996 a year that is much more wellknown for a little film called Independence Day. Both movies are about alien invasions, but are different in execution and style. As to where Independence Day is an action film about visuals and explosions, The Arrival focuses on paranoia, plausibility, and drawing the audience in with an intriguing and credible plot.

Zane Ziminski (Charlie Sheen) and his partner Calvin (Richard Schiff) are radio astronomers who have picked up a signal from outer space, just around a star called Wolf 336, which is 14.6 light years away from Earth. Arrival is writer David Twohy’s directorial debut (his other work is Pitch Black, another great sci-fi thriller) and he does a very good job. He makes the plot quite intelligent and keeps the pace moving quickly with a riveting finale. The underlying paranoia is one of the aspects that fuels this movie along. X-Files fans should definitely enjoy this film and get a kick out of it.

Many critics seemed to think Charlie Sheen was miscast, though I find no credibility in that statement. He is superb in his role as a normal guy who gets caught up in a dangerous conspiracy. His entire performance is very believable and it’s easy to feel sympathetic and root for him at the same time. The supporting performances are decent, with Teri Polo and Lindsay Cruise doing fine jobs as the women in Zane’s life.
Movie Content: 7.5/10

The print is presented in 1080p/AVC MPEG-4 with a 1.85:1 aspect ratio. ‘The Arrival’ holds a rather soft image throughout with a muted color palette. Details aren’t lacking at all, but they are rather inconsistent throughout the film. Much of this has to do with the age of the film and being shot on a smaller budget. Blacks are solid throughout the print. Print Quality: 7/10

The audio is presented in DTS-HD MA lossless 7.1 mix. The films special effects really takes advantage of the soundfield with any action sequences. The DTS track  The rears get a fairly good work out with a lot of shifting from speaker to speaker making this a dynamic sounding experience. I couldn’t believe how dynamic the sound effects and the soundtrack were across all surrounds. Dialogue is well balanced and very clean.
Audio Quality:9/10

There’s a lot of scientific talk in this film with many ideas thrown around and developed but it’s doubtful viewers will get lost in this film’s plot. It may seem confusing at first but it starts to become clear by the middle and the end. The image quality was a tad bit disappointing. The same could be said with the DVD as it also had a subpar image. The audio track is the most redeeming quality from a technical standpoint.
Overall Rating: 8/10