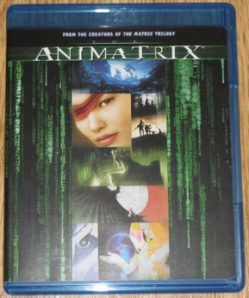 Anytime I talk about ‘The Matrix’ franchise with others, there is either a love for the entire series of films or it turns out that only the first film is loved with ignorance that there is even two sequels. With the success of the ‘The Matrix’, the Warchowski Brothers met with animators in Japan to flesh out what would be a series of short films also known as chapters for an animated film to be called ‘The Animatrix’. Each one of the ‘The Animatrix’ short films fit in different periods of each film and videogame ‘Enter The Matrix’. It is rather interesting how each short film helps tie things together filling in the gaps.

With each chapter or vision of ‘The Animatrix’ we are given actual tie-in to the film series. The first vision opens up ‘The Animatrix’ with an excellent animation of two warriors fighting with each other using their swords in a duel. The title of the first vision is “Final Flight of the Osirirs” and is a rather visual one. This is one of the better animations of the entire set of episodes that the CGI just looks absolutely stunning.

What we get her is a mix of CGI and Japanimation throughout the different short films. I found the first few short films after “Final Flight of the Osirirs” to go in a rather strange direction to a point where a few things weren’t making sense in the story they were trying to tell. Things started turning around halfway through where the short films seemed to get back on track of making sense. I would not see this as a wasted effort since the goal of ‘The Animatrix’ is to fill those gaps that were missing in the story of the films.

Picture/Audio Quality
The print is presented in a 1080p/VC-1 codec with a 2.40:1 aspect ratio. While the print is presented in 1080p, some of the picture quality will be a bit of a mixed bag to some since parts are made of CGI and other of standard animation. Any scenes with CGI look extremely impressive and pristine image quality such as ‘Final Flight of the Osiris’ as a good example. Colors just pop and are some of the best you will see from an animated film. The Japanimation parts of the ‘The Animatrix’ also look good in high definition with colors also looking vibrant. Blacks look deep and are very good with no hints of softness. Since there are two different styles being used here you can view both image prints differently, but one has to admit that they did a very good job with bringing these to high definition standards.

The audio is presented in Dolby TrueHD 5.1 and Dolby Digital 5.1. I saw ‘The Animatrix’ on regular DVD and XBOX Live versions, and the film does benefit from the new audio codec. This release is still rather front heavy as it was in both previous releases, but the rears do get their workout here with the move to high resolution lossless audio. The soundfield is rather interesting one with all of the action that is going on and sound effects come through very clean. There is also more bass in this soundtrack now than the previous DVD version. Both dialogue and the narrated portions of the film are also very clean with no issues in loss of quality. This is a well balanced mix between the sound effects and dialogue portions of the film.

If you are a fan of ‘The Matrix’, ‘The Animatrix’ is a great addition to the franchise and helps expand the tale of the world that the Warchowski Brothers created. I highly recommend purchasing this film if you can find it by itself or even purchasing the ‘The Ultimate Matrix Collection’ which is the only way to obtain the film in full HD unless you go with the XBOX Live version which does not have the TrueHD 5.1 audio.