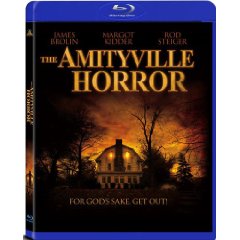 We have two stories here in ‘The Amityville Horror’, but the story of the DeFeo, Jr. family is what started the whole phenomenon. In November 1974, Ronald DeFeo, Jr. would kill his entire family in the with shotgun blasts to the back of the head to each family member. Ronald DeFeo, Jr. would say that the reason why he killed his family is that the there were voices and paranormal that were telling him to kill. Then 13 months later, where the movie begins George (James Brolin) and Kathy Lutz (Margot Kiddler) land the deal of a lifetime with the house at $80,000 so they decided to purchase the home. They would move in on December 1975 with their 3 children whom Kathy had from a previous marriage.

The first few days weren’t so bad at the home, but day by day the changes to George Lutz were becoming more apparent. He was taking on a personality that wasn’t his and the family man that he was known as, he was turning into monster. Initially George was being affected the most but at a slower rate where the children was another story. They were being traumatized by the paranormal versus what was happening to George. Their daughter Amy (Natasha Ryan) begins to talk about an imaginary friend by the name of Jodie that gets her into all kinds of trouble. It just gets worse for the family from here as George continues to wake up at 3:15 a.m. every morning like Ronald DeFeo was before he murdered his family. George begins to feel really cold all the time and he looks like he has some kind of crazy flu, he looks so bad. He even gets irritated easier as his temper rises through the roof with the smallest thing. The paranormal in the house are starting to do something to George that they did to Ronald turning him to a dark and twisted side which would make him murder his family.

The family would only last 28 days in the house before they would leave their belongings and never return to collect them. Both Brolin and Kiddler do an excellent job with their performances in the film. While there are many supporting actors, like the rest of the family and the different priests that come to bless the house, they are the ones that still hold the film together. While the movie is something that we watch in our household a few times out of the year, there are some scenes where here in 2008 do not hold up very well. The original story about the DeFeo murders mixed with the story of George and Kathy Lutz makes for a very spooky horror film no matter how you look at some of the film that doesn’t hold up so well. This story to this day still freaks me out no matter how much George and Kathy Lutz fabricated and made up the 28 days of hell they had to deal with.

Picture/Audio Quality
The print is presented in 1080p/AVC MPEG 4 encode with a 1.85:1 aspect ratio. The film is 29 years old and is nearing its 30 year Anniversary. I have seen the film on broadcast television and the two DVD releases over the years, the film has never looked so good. The print has been cleaned up rather well for the Blu-ray release when compared to the DVD. While things aren’t perfect, there is grain still on the print, but nowhere near what was found on the DVD. I found the colors to be rather flat lacking any pop.

The audio is presented in a DTS-HD MA 5.1 mix. While I find the new mix to be a nice added bonus since there is a bit more going on due to the sound effects, I did find some of the effects to be rather scratchy at times. Dialogue comes through the center channel rather clear. I found overall the new sound mix to be a bit too loud, in a way where all the levels on the mix were boosted to give the soundtrack a louder boost.

Special Features
There are no special features and that is a real shame as the previous MGM Special Edition DVD has a few special features which were really cool. I own the box set that released a few years ago so it looks like I won’t be replacing the original film in that set. The only thing we get is the Theatrical Trailer in HD, which is a shame for a good horror film like ‘The Amityville Horror’.

If you are a huge fan of the original film and want to upgrade to better picture and audio quality over the DVD, the Blu-ray release is the best route. It is disappointing that the disc was released as bare bones on Blu-ray with only a Theatrical Trailer and an MSRP of $39.99.