Lius Bunuel’s final film explodes with eroticism bringing full circle to the director’s lifelong preoccupation with the darker side of desire. Bunuel regular Fernando Rey plays Matthieu an urbane widower tortured by his lust for the elusive Conchita. With subversive flare Bunuel uses two different actresses in the lead role- Carole Bouquet a sophisticated French beauty and Angela Molina a Spanish coquette. Drawn from Pierre Louys’ 1898 novel La Femme et le Pantin That Obscure Object of Desire is a dizzying game of sexual politics punctuated by a terror that harkens back to Bunuels brilliant surrealistic beginnings. 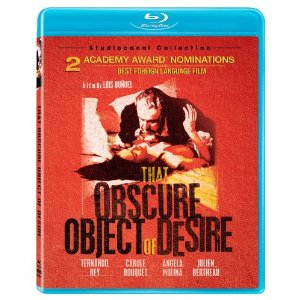 ”That Obscure Object of Desire” is one of the highest achievements in sound cinema, one of the greatest films ever made…you get the idea!!!

It’s perhaps Bunuel’s greatest film or if not, the one that reflects with finality his philosophy and his view of life. It’s a viewpoint that’s at one and at the same time pessimistic and compassionate, corrosive and tender, angry and despairing, comic and tragic.

Given that these pardoxes exist simultaneously, Bunuel’s infamous decision of having the female character played by two very different actresses(and then being dubbed by a third); as well as casting two of his favourite actors – Fernando Rey and Michel Piccoli in the same role with the former playing the character physically and the latter his voice fits like a glove and seems the least strange in the world of this film. The world of this film moreover is not that far apart from the world proper even if thirty years seperate the time of it’s release from today.

Bunuel’s film is an adaptation of a famous French novel(which served the basis for Sternberg’s ”The Devil Is A Woman”) which I have not read. Yet I have no doubt that Bunuel’s film has a sensibility that’s entirely different from the text. An old artistocract, Mathieu falls in love with a woman named Conchita but due to their strong will and sense of freedom are unable to physically consummate their relationship. Their love for each other becomes a kind of madness on each character’s part as well as part of their game of torturing each other psychologically and spiritually, culminating in violence.

The film is about human beings who are never able to precisely know what they want or desire and in the case of their relationships with human beings what they want or desire from them and what they in turn desire from you. And if the object of desire is forever obscure, than finding it is not only very difficult it’s also futile in a world where people are under permanent Swords of Damocles’ where terrorist attacks can make one’s search for the object of one’s desire utterly futile and meaningless.

Throughout his career and his many stages through the different kinds of movies he’s made Bunuel has sought to illustrate that the world we live is far from the best of all possible worlds and that humans are forever victims to their own flaws and vanities as well as the world at large. Yet as caustic and sarcastic as his sensibility is, Bunuel’s relationship to his characters(with the exception of ”The Discreet Charm…” and ”Le Fantome de la Liberte”) seem to be of compassion rather than hatred. Only Bunuel I suppose could treat characters like Mathieu and Conchita seriously and find humanity within them despite the absolute violence they inflict on each other.
Movie Quality: 10/10

The print is presented in 1080p/AVC MPEG-4 with a 1:85:1 aspect ratio. Colors are vibrant and vivid, providing for a bright colored image. Flesh tones are accurate. Blacks are deep, yet there are a few instances where they look a bit soft. Details are prevalent throughout the entire print. I was very impressed with the image considering that the film is over 34 years old.
Print Quality: 9/10

The audio is presented in a DTS-HD Master Audio 5.1 mix. With this film being dialogue centric do not expect your soundfield to be booming throughout the entire film. The rears barely get any sound through them unless there are some effects or the score from the soundtrack. Dialogue comes through the center channel very clear and crisp.
Audio Quality: 9/10

Fernando Rey helped bring to life Bunuel’s most bizarre characters with charisma and taste. Though we recognize the flaws of Mathieu’s character we harbour no dislike for him and fully acknowledge in the scene before last, where he observes a woman knitting a torn, blood stained sheet that he deserves the fleeting sense of peace that he finally recognized as his real ”object of desire”.
Overall Rating: 9/10