The year is 2039 and the world wars have destroyed everything and territories are run by corporations. The mightiest of which is TEKKEN. In the midst of the ruined society, one warrior rises from the streets. A young man with street smarts and raw fighting skills who is driven by nothing more than vengeance must defeat the world’s most elite fighters in the greatest tournament ever known and become the “King of Iron Fist”. 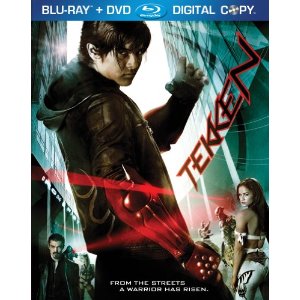 If nothing else, “Tekken” gets in my good graces just for being what it is: a flashy and ultimately decent tournament-based martial arts movie bearing an impressive cast list. The film’s eventual falling point, however, is that it’s based on a video game series that’s so much better than decent that I can’t help but lament that it isn’t as awesome as what I’ve been able to create on arcade screens for the past sixteen years. If judged solely on these latter disadvantages, my rating for this film would be lower, but in light of my genuine appreciation for the remaining content, I’m going to consider it from a rounder perspective and name it as one of the better adaptations out there.

Like in most video game flicks, the story suffers. It’s played straight and high-tech, excluding all supernatural elements from the games and seriously watering down the triangle of contempt that serves as the canon plotline between the three main characters, Jin Kazama (Jon Foo, The Protector), Kazuya Mishima (Ian Anthony Dale, Mr. 3000), and Heihachi Mishima (Cary Tagawa, Mortal Kombat). The film takes place in a dystopian future where the Mishima-run Tekken corporation reigns supreme over a scarred earth and sponsors a regular fighting tournament to keep the masses entertained; after the death of his mother at the hands of the organization, Jin enters the tournament to avenge her while Kazuya plots the overthrow of his father.

The backgrounds of most of the characters have been addled a bit as well, which is disappointing but I’ll argue that their better-than-average casting makes up for some of this: Kelly Overton (Breaking Dawn) as Chirstie Monteiro, Luke Goss (Blade II) as Steve Fox, Gary Daniels (The Expendables) as Bryan Fury, Darrin Henson (Soul Food) as Raven, Lateef Crowder (Undisputed III: Redemption) as Eddy Gordo, Cung Le (Pandorum) as Marshall Law, and several others are swell fits, making for one of the best ensembles ever seen in a fighting-themed adaptation like this (or at least a much better one than in the upcoming “King of Fighters”). Utilization of these performers and characters, however, is another issue: Heihachi and Steve Fox are prominent characters but don’t fight at all, Kazuya is written as a slimy rich boy rather than the fighting beast we know him as, and – with very few exceptions – no character besides Jin has more than a single fight.
Movie Quality: 7/10

The print is presented in 1080p/AVC MPEG-4 with a 2:35:1 aspect ratio. The print looks very good throughout without any apparent issues. Colors are vibrant and carry pop which brings out the fine details. The detailed scenes stand out very well. Blacks are deep. I found the print to be crystal clear with no artifacts or print damage. The darker look and feel of the film looks great with the appropriate lighting making this timepiece film standout.
Print Quality: 9/10

The audio is presented in a DTS-HD MA l0ssless 5.1 mix. I was immersed at all time throughout no matter if it was special effects or dialogue. The depth of the dialogue is well done through the center channel sounding very clear and crisp. The action sequences sound nice and expansive in the sound field with plenty of action panning through all the speakers. Then add the special effects with hard hitting, swinging and fighting during the Iron Fist Tournament this adds to the atmosphere.
Print Quality: 9/10

Hollywood still doesn’t get it when it comes to adapting our beloved fighting games to movies and Tekken is no revolutionary trial.
Overall Rating: 8/10