Disney’s 50th full-length animated feature film, Tangled is a visually appealing, music-filled adventure full of romance and humor. The movie focuses on Rapunzel, a girl with long magical hair who’s lived her entire life imprisoned in a tower by her greedy mother. Naturally optimistic and acquiescent, Rapunzel (Mandy Moore) rarely complains about her circumstances, but for her 18th birthday she longs to leave the tower to see the floating lights that appear every year on her birthday. Her mother (Donna Murphy) refuses her request, but when thief Flynn Ryder (Zachary Levi) climbs the tower to escape his pursuers, Rapunzel (once she’s conked him on the head with a skillet multiple times) impulsively decides to trust the young man and convinces him to help her escape to see the floating lights. Thus begins a journey that alternates quite schizophrenically between optimistic excitement and guilty remorse that will ultimately change Rapunzel’s and Flynn’s lives forever. Tangled is a masterful blend of humor, adventure, passion, and drama combined with a great musical score and top-notch animation. The Real 3-D effects add to the experience but probably won’t really be missed in other formats. Best of all, Disney presents a princess who matures from a meek and compliant girl into a spunky young woman who’s not afraid to pursue her dreams and risk it all for love–now that’s a Disney princess worth emulating. 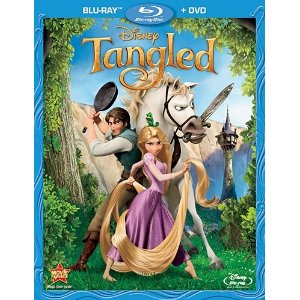 Disney takes us back to the likes of classic stories such as Beauty and the Beast and Aladdin. Tangled is a much simpler film than those, as far as plot and characters are concerned, but it feels just as magical. The animation is stunning, and there is some amazing cinematography; something I really enjoy seeing amidst the colorful backdrop of an animated landscape. Oh, Rapunzel’s tall tower, tucked away at the edge of a forest by a waterfall. It reminded me of something Lara Croft would stumble across in a Tomb Raider game.

The movie is also very funny. We meet a guy named Flynn (voiced by Zachary Levi) who much like Aladdin, is a thief but isn’t the worst of guys. He’s hilarious, charming and cunning and he’s about to meet his match: Rapunzel.

Rapunzel (Mandy Moore) was kidnapped at a young age by an evil woman fed up with her aging looks. She took her from her home because she possesses a few very strange gifts that allow her to work miracles. The one of most importance to our villain being that when she sings, her hair glows and can transform the decrepit old woman into one hot little animated dish of yummy. The woman raises Rapunzel as her own daughter.

Every year on Rapunzel’s birthday, magical lights that hold meaning to the story, light up the sky. She is fascinated by this and dreams of seeing them up close, as she can only see them from her window. For fear that she will be found out; the mother forbids her from ever leaving the dusty old tower that is so high up, access can only be gained by the lowering of a very long rope. Or a very long ponytail!

Naturally, Flynn happens upon Rapunzel’s tower by mistake when fleeing from someone he’s just robbed. While her mother is away on a three day trip, Rapunzel decides to call on the aid of Flynn. Stashing away his precious stolen high dollar item, she blackmails him into taking her to see the lights before she will return it to him.

The print is presented in 1080p/AVC MPEG-4 with a 1:33:1 aspect ratio. ‘Tangled’ is a rather impressive s animation on Blu-ray. This is a very colorful film that is vibrant and pops. With a strong color palette, it brings out the fine details. Black colors are deep looking. Taking all these strong elements, they produce one sharp looking picture. We have an almost 3D look with the film even though this version is not in 3D.
Print Quality: 9.5/10

The audio is presented in a DTS-HD MA lossless 7.1 mix. The sound is rather impressive in ‘Tangled’ and this I wasn’t even expecting going in. It takes advantage of the soundfield with the rears actually getting a good workout with the soundtrack and effects. The sound from the fight scenes is also well done. Dialogue is well placed through the center channel with voices being so ever clear.
Print Quality: 9.5/10

angled is an amazing movie! The story is very well written and the pace of the movie never gets boring. Alan Menken’s score is breathtaking! Easily one of my favorite Disney movies and highly recommended for everyone in the family.
Overall Rating: 9/10