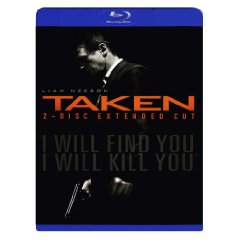 What could be a skillful but ordinary action flick gets a surprising emotional heft from the presence of Liam Neeson as the hero. Bryan Mills (Neeson) has given up his career as a spy to form a relationship with his estranged teenage daughter–but when, on a trip to Paris, she’s kidnapped by slavers, Mills uses all his connections and skills to turn the city of lights upside down and rescue her. Like most of the movies that writer/producer Luc Besson has a hand in (such as La Femme Nikita, The Transporter, Unleashed, and many other French action movies), Taken drips with lurid violence (a bit toned-down to get a PG-13 rating, but there’s still plenty of it), deranged sentimentality, and stereotypes of all kinds. But this doesn’t stop his movies from being effective thrill-rides, and Taken is no exception. Taken pays just enough attention to the illusion of procedure–making it seem like Mills knows all the right steps to track down his daughter–that the movie cheerfully seduces your suspension of disbelief, despite many plot holes and scenes where Mills doesn’t get scratched despite bullets flying in all directions or pretends to be a French policeman despite not speaking French or even adopting a French accent. What holds it all together is Neeson; his gravitas and emotional availability make his character–the usual action fantasy of impossible competence and righteous fury–somehow seem real and relatable.

Liam Neeson is one of those actors that although you will admire their work, Taken is a movie you could never expect them to be the lead in. It’s a full blown action movie that challenges the 56 year old and his acting ability to appear cool. The film has its drawbacks, but they are all massively outweighed by the better parts of the film.

This is a really good and fast paced action movies that has some excellent chase and combat scenes. Neeson seems to hold his own well and can display some excellent ability when it comes to those action scenes (although I’m sure a stunt double was cleverly placed in those scenes). Some of the dialogue is quite cringe worthy especially when Neesons character is on the phone to the kidnapper and he tells him that he has experience and he will be coming for them. It’s something very cliché and annoying in some respects but quite cool in another. The other gripe I had about it was the accent of Neeson. I’m not sure where his character was meant to hail from but it certainly wasn’t American born and bred, or at least I hope not. Neeson’s a good actor but he really needs to work on his American accent because it just destroys any role he’s in when he’s meant to be an American but his Irish accent clearly shines through.

It’s a great film overall though and I would strongly recommend it to any action movie fan. He’s good in this role, but I can’t see him doing another role like this ever again as although he held his own, he seemed at times to be quite uncomfortable in what he was doing. The supporting cast are OK but nothing to shout about, the story is well done and seems to be quite intelligent in what it’s talking about when on the subject of human trafficking.
Movie Content: 9.5/10

The print is presented in 1080p/AVC MPEG-4 with a 2.40:1 aspect ratio.This is one of those films that will make you happy being an early adopter of Blu-ray. From the colors to the details, your jaw will drop if you look for some of the superb details. Colors are vibrant providing an excellent looking picture. Flesh tones are natural and accurate looking. Blacks look inky. Details are where this film shines the most with the camera even panning away in many scenes. Not once did I feel like I was at a loss for details making this a very strong presentation.
Print Quality:9/10

The audio is presented in DTS-HD MA lossless 5.1 mix. This is a very atmospheric and immersive sounding film. The rears provide quite a few times where sound effects panned across the speakers. There are many scenes that are outside which also take advantage of the soundfield providing some dynamic sound. Dialogue is clean through the center sounding ever so crisp.

This is an great action-thriller that keeps you thinking and your heart racing. This is an excellent role for Liam Neeson. One of Luc Besson’s best movies of his career, produced and story wise. This is one of the best action films of the new year. Albeit a few of the quirks in the story and dialogue, this is one exciting film from start to finish. On Blu-ray the film looks and sounds very good. I highly recommend this film to anyone looking for an action film with good story.
Overall Rating: 9/10