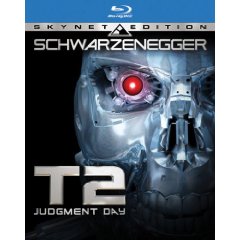 After he pushed the envelope of computer-generated special effects in The Abyss, director James Cameron turned this hotly anticipated sequel to Terminator into a well-written, action-packed showcase for advanced special effects and for one of the most invincible villains ever imagined. Terminator 2: Judgment Day is a legitimate sequel: there’s more story to tell about a hulking, leather-clad android (Arnold Schwarzenegger) who arrives from the future to protect a rebellious teenager and future leader (Edward Furlong) from being killed by the tenacious T-1000 robot (Robert Patrick), whose liquid-metal construction makes him seemingly unstoppable. The fate of the future lies in the balance, with Linda Hamilton (who would later marry her director) reprising her role as the rugged woman whose son will change the course of history.

“Terminator 2: Judgment Day” picks up approximately ten or so years after the events of the first film. Sarah Connor (Linda Hamilton) has been locked away in a mental institution after her crazed warnings of an impending holocaust at the hands of machines, and her 10-year old son John (Edward Furlong) is living with foster parents. After the initial failure of the first Terminator to complete its mission of eliminating Sarah, the evil Skynet has sent back an even more advanced model, the T-1000 (Robert Patrick), to hunt down and kill her son John before he can grow up to become the leader of the human resistance. However, John’s future self is not without his own resources as he has sent back a weapon of his own to protect his younger self, a reprogrammed Terminator (Arnold Schwarzenegger) identical to the one that attempted to kill his mother ten years before.

A general rule about movies is that nine times out of ten the sequel may be on par with the original film, but rarely will it ever surpass what had come before; however, I feel very confident in saying that ‘Terminator 2: Judgment Day’ is easily one prime example of an exception to that rule. “The Terminator” was an excellent sci-fi movie that mixed futuristic elements with those of the modern day, but some may have wondered what more story could there possibly be since Sarah defeated the first Terminator, which should have saved her son and the future as well. Based on what I saw in ‘Terminator 2: Judgment Day’, or ‘T2’ for short, what happened in the original was merely the beginning of a much bigger problem for mankind.

Writer/director James Cameron has once more crafted an extremely taut, perfectly paced, sci-fi thriller that is leaps and bounds above what was done in the first movie. The story for ‘T2’ is much bigger, the drama is more intense, the action is pulse-pounding, and the visual effects are still incredible even to this day. James Cameron must have known that he was merely laying the initial groundwork in “The Terminator” for a vast mythology surrounding mankind’s future against the evil machines, because that last scene in the original movie hinted that something bigger may be on the horizon. Even though so many of us had seen the first movie and caught on to the hint that there may be more to tell, who knew it would be this massive blockbuster of a film that remains just as popular all these years later. Where the first film briefly touched upon Skynet and gave us brief glimpses at the war that awaits us in the future, ‘Terminator 2: Judgment Day’ takes all of that and builds upon it greatly. ‘T2’ explores how events in the original movie actually set into motion the events of the future, shows us a very emotionally raw heroine in Sarah Connor, a different side to the Terminator from the first film, and to top it off gave us even more glimpses into the future battles that will ravage mankind.

The cast of ‘Terminator 2: Judgment Day’ is comprised of a few familiar faces and some new ones as well. Linda Hamilton reprises her role of Sarah Connor with a much more emotionally charged performance than what was required of her in the original movie. Sarah is a completely different person than she was when we last saw her, now she is this highly trained warrior that is emotionally scarred and torn by what she feels to be her duty to train her son to become the leader of man, and yet to still protect him and care for him as her child. Arnold Schwarzenegger is back, just as he promised in the first movie, as a reprogrammed Terminator, and proves yet again that this was the one role that he was born to play. Even though the character is just a machine, there are very neat moments within the movie where without saying much of anything, Arnold allows the Terminator to convey that there is some kind of connection that exists, a bond if you will, between the Terminator and John. James Cameron’s script really aided Arnold in what he was able to do with the Terminator this time around by exploring the fact that the machines can learn from and mimic humans, which allowed Arnold to show some, albeit limited, emotions while still remaining in character.

In the first movie the visual effects were very good, especially given the time at which the film was made, although over time I admit that some of the effects have lost their luster. While that statement is true for 1984’s ‘The Terminator’, it couldn’t be farther from the truth when referring to the stellar special effects work done for 1991’s ‘Terminator 2: Judgment Day’. While technology has definitely improved significantly since 1991, the effects within this movie still hold up quite well, and while maybe not as perfect as today’s effects, they are still very impressive in their own right. For example the morphing technology, used to create the numerous effects sequences for the liquid Terminator, was so mind-blowing back in 1991, and yet even today it still looks astonishing.
Movie Content:10/10

The print is presented in 1080p/VC-1 with a 2.35:1 aspect ratio. The new Skynet version is great looking with better clarity and detail. There are some scenes still that lack details. I found the blacks to be deeper and blue’s stuck out much better and not muted looking. The grain has been minimized a lot, especially in the backgounds. A good example is in the beginning of the film with the ongoing battle. Is there DNR? Of course, but it isn’t anything that made me upset. I also found the original Lionsgate release to have a lot of softer scenes. Then add the noise in some of the backgrounds. It’s inconsistent where some up close scenes have detail and others don’t.
Print Quality: 8/10

The audio is presented in DTS-HD MA lossless 6.1 mix. With the second time on Blu-ray, we get a DTS HD MA lossless track while the previous Blu-ray had a Dolby Digital 5.1 track, which I found to be underwhelming. This mix is definitely better and more dynamic sounding providing a bombastic and loud soundfield.  Dialogue is clear and loud through the center channel providing a balanced mix.
Audio Quality:9/10

‘Terminator 2: Judgement Day’ is an excellent movie. If you liked The Terminator, then you are going to like the second. Arnold plays a superb role as the terminator, coming back to save the future leader John Connor. Compared to the previous Blu-ray release, I found the image quality to be better of the new Skynet Edition. Also add the addition of a lossless audio mix here which was missing on the previous release and this is worth the upgrade.
Overall Rating: 9/10