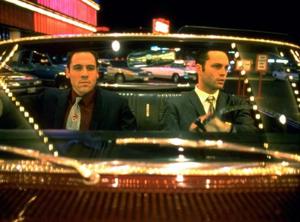 Hip and Hilarious-critics and audiences alike are raving about this must-see comedy hit that’s so money, it catapulted Vince Vaughn (The Break-Up, Wedding Crashers) and Jon Favreau (Couples Retreat, Iron Man) to stardom! It’s the laugh-out-loud look at a fun group of friends who spend their days looking for work and their nights in and out of hollywood’s coolest after-hours hangouts! When the lovesick Mike (Jon Favreau) can’t seem to shake a relationship rut, his smooth, fast talking buddy Trent (Vince Vaughn) decides he’ll do whatever it takes to show Mike a good time! Whether laughing over martinis in smoky cocktail lounges…or searching for beautiful babies on an outrageous road trip to Vegas, the young Swingers are determined to rewrite the rules of modern dating! 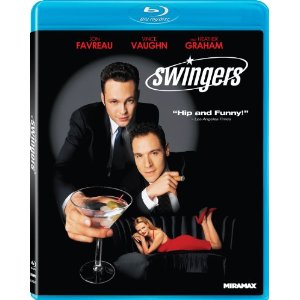 Few films have explored the pain of being a 20-something single as hilariously as Doug Liman’s classic “Swingers.” If you’ve never seen this film, which packs a bevy of memorable scenes and spawned several catch phrases (“You’re so money!”), it’s high time you checked it out.

“Swingers” follows the ups and downs (mostly downs) of Mike (Jon Favreau), a struggling actor who has recently moved to Los Angeles from New York. When he moved, he left behind a girlfriend of six years, and he hasn’t been able to get her off his mind, a problem that’s exasperated by his lack of success on the L.A. singles scene.

Fortunately for Mikey, he’s got some buddies who are bent on cheering him up, most notably the smooth-talking Trent (Vince Vaughn), who convinces Mike to make an impromptu trip to Vegas to wash away his problems with gambling, women and booze. It’s the first of many unsuccessful (and roaringly funny) forays into the singles scene for Mikey, who is alternately too nice, too nervous, and too neurotic to achieve any level of success with the ladies.

This sort of material has been mined with much less success by many movies, but “Swingers” has three noteworthy forces working for it: star Favreau’s superb script, a great cast and Liman’s top-notch direction.

The witty screenplay delivers enough laughs and memorable lines to reward repeat viewings, from Trent’s boast that he’s going to “Find me two cocktail waitresses and pull me a Fredo” to a hilarious conversation between Mike, Trent and the rest of the crew about how long you should wait before calling a girl whose “digits” you got.
Movie Quality: 9.5/10

The print is presented in 1080p/AVC MPEG-4 with a 1:85:1 aspect ratio. Based on the cameras that were used, which are handheld, this print looks pretty good when compared to the previous DVD release. No DNR or EE has been used here and it really shows with the print carrying a thin layer of grain. The grain is a nice thin layer that never becomes obtrusive. Black levels are good, but not excellent and even look a little crushed at times. Colors are pretty good, but lack that strong pop for a film of this age due to the cameras used.
Print Quality: 9.5/10

The audio is presented in a DTS-HD MA l0ssless 2.0 mix. I am not a fan of using a 2.0 mix even though when a film doesn’t warrant it. The issue here is that ‘Swingers’ has a soundtrack that can take advantage of a 5.1 mix. This is a front heavy experience using the 2 channels only. This is very noticeable too during the casino scenes which could have been nice listening to the sound of slot machines in the background. Dialogue is clean through the center sounding ever so crisp.
Print Quality: 8/10

It’s hard to imagine Swingers has been out for so long, but it perfectly captures a time segment of American life when that style of dress, music, and life was popular. The video quality on this Blu-ray suffers a little bit due to the use of the handheld cameras and the use of DTS-HD MA 2.0 hurts a film where it could have been a huge benefit. If you are a fan of this film, I highly recommend it even if it is your first time viewing this film.
Overall Rating: 8/10