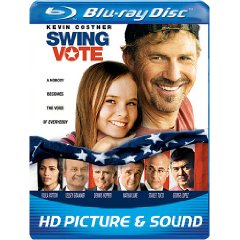 With the upcoming presidential election looming, ‘Swing Vote’ is certainly timely, but it also strains to be timeless. Bud Johnson (Costner) is a good-natured goof-off with custody of his precocious 12-year-old daughter Molly (Madeline Carroll). He spends most of his time napping and guzzling beer and getting canned from jobs. But he’s not a bad guy, really – just aimless. He doesn’t follow politics and doesn’t much care who wins the presidency, but Molly makes it her business to see that he votes – it doesn’t even matter for whom. When he screws up on election day, she steps in for him. Through a series of implausibilities too risible to relate here, Bud’s vote, which went unprocessed, becomes a do-over. Oh, and his choice will become the next president.

This is a very ridiculous premise to the story, but the film still managed a total worldwide gross of $16 million dollars at the box office. This is the kind of political movie in which all sides are given equal time. Republicans and Democrats are made to look equally good-bad and no real-world issues are introduced except as the stuff of one-liners.

When the network TV folks and demonstrators of all stripes and creeds descend on Bud’s tiny town of Texico, New Mexico, the circus-like atmosphere is remarkably well-mannered. Incumbent Republican President Andrew Boone (Kelsey Grammer) courts Bud by bringing him aboard the presidential plane for a chat. Democratic challenger Donald Greenleaf (Dennis Hopper) goes for a more down-home approach, setting up a shindig where Bud can jam with his band performing covers of Willie Nelson hits.

Grammer is surprisingly robust as the president. Grammer should think about going into politics. Costner is pleasant enough but his affability here carries too much ideological baggage. At his best, in films like “Bull Durham” and “Tin Cup,” he could be marvelously easygoing and yet temperamental.
Movie Content: 4/5

The print is presented in 1080p/AVC MPEG-4 with a 2.40:1 aspect ratio. I wasn’t expecting much from the video presentation, but ‘Swing Vote’ really took me by surprise. Colors are bright and vivid with a 3D pop to the image. Blacks are deep and almost inky. Flesh tones are natural and accurate. This is image is also fairly sharp. There is some subtle grain throughout the presentation which never becomes obtrusive.
Video Quality: 4.5/5

The audio is presented in DTS-HD MA lossless 5.1 mix. With this film being dialogue driven, the presentation is front heavy as I would expect from most comedies. Dialogue is clean through the center channel with no apparent issues. The rear surrounds do not get much usage, except for a few effects.
Audio Quality: 4/5

While the story of ‘Swing Vote’ is so far out there, this is a very enjoyable film. Kevin Costner pulls in another spectacular performance and watch for Madeline Carroll to be the next big thing in Hollywood. The Blu-ray version boasts a near demo quality video and audio that is sufficient for comedies. I highly recommend this film as a purchase if you are a huge fan of Kevin Costner, but this film is also a great rental for those that are unsure about purchasing.
Overall Rating: 4/5 (Purchase)