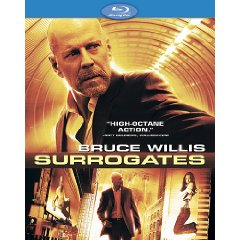 Intriguingly scaled more along the lines of a good sci-fi short story than a steroid-enhanced action picture, Surrogates proposes a variation on spectatorship-run-amok. In the near future, human beings need no longer leave their homes: mechanical surrogates, similar in appearance (but younger looking, fitter, with fewer wrinkles and more hair) can move about in the world on the user’s behalf, following commands and absorbing physical wear and tear. A cop (Bruce Willis) begins investigating a mystifying case of a user who died when his surrogate got blasted by a fancy ray-gun in the street–that’s a definite violation of the company guarantee. In the course of a trim, sub-90-minute running time, the Willis character himself is forced to enter the mean streets in his own flesh-and-blood version, not his surrogate, a move that puzzles both his wife (Rosamund Pike) and partner (Radha Mitchell). In the movie’s scheme of perfect surrogates and digitally-smoothed faces, the grizzled humanity of Bruce Willis comes blazing through; what a relief to see a battered human in the midst of the beautiful people. Director Jonathan Mostow (Terminator 3) gets the world right, but one waits in vain for a fuller picture of the effects of this surrogate population, or a deeper study of the creator (James Cromwell) of the technology, or a reason to get involved in the rebel leader (Ving Rhames in a fright wig) and his reservation populated by defiant non-surrogates. Sprinting along as it does, Surrogates doesn’t find time for these presumably crucial details, and the result feels just a little skin-deep.

The story sets us in a near future world where no one leaves their house, instead opting to hook their brain up to a machine that allows them to telepathically connect to a synthetic body that goes out into the world. This saves everybody the hassles of catching diseases, having to use energy, getting maimed or killed, etc. Also, of course, the synthetic body does not look like its operater, instead being either a beautiful representation of themselves, or a completely different person or gender altogether. A person’s bodily image becomes precisely what they desire.

Naturally, something so idyllic yet strange has detractors, and the plot follows Bruce Willis as a detective as he attempts to track down a weapon that is capable of frying the synthetic surrogates in a way that traces back the line and at the same time kills the operators. The story is rather slow developing and it really took me about half of the movie until I was finally somewhat interested in the story. However, the ending though it was a twist I didn’t foresee, was none-the-less unsatisfying.
Movie Quality: 6/10

The print is presented in 1080p/VC-1 with a 1.85:1 aspect ratio. Color is vibrant and bold in this transfer. A very good example of that is the color red, when blood splats on the floors, walls, and in the air. The film is so colorful that it is very good in details. There are also moments though where the transfer does lack in a few areas. Lighting was a problem in a few scenes where there appeared to be too much light in the background.
Video Quality: 9.5/10

The audio is presented in DTS-HD MA lossless 5.1 mix. This mix and sounds better than I originally thought. This is a film that is dialogue heavy and all the sounds for the most part is coming through the center channel very cleanly and is crisp. Whenever there are sound effects, all speakers are working and you will hear sounds throughout the film that you wouldn’t expect.
Audio Quality: 8.5/10

‘Surrogates’ is an entertaining film, yet it misses out on many key elements to make this a good sci-fi film. Video quality is superb and caught me by surprise, with audio that didn’t meet my expectations. There are a nice amount of special features in high definition. I would recommend a rental first if you are interested in this film.
Overall Rating: 7/10