The thrilling journey of the Winchester brothers continues as SUPERNATURAL enters its historic fourteenth season. Sam (Jared Padalecki) and Dean (Jensen Ackles) have matched wits with monsters, demons, Heaven and Hell. But in the show’s thirteenth season, the Winchesters were thrown into a terrifying alternative universe – an apocalyptic world where they were never born, all while training Jack (Alexander Calvert), the son of Lucifer, and rescuing their mother. And they won! But, with the apparent demise of Lucifer, Sam and Dean have a new problem on their hands… as the Archangel Michael has escaped the other universe…in Dean’s vessel! 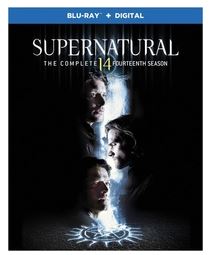 All the TV shows are having their ups and downs, so is Supernatural, but this one here so grow on me over 10+ years I’ve been watching the show, it would be unfair if I gave it a score under 10. Over my college years, different cities I’ve been living at in search for job and myself actually – Winchesters and Casstiel were always here almost every week to entertain me. A long way Supernatural and myself have done over the years so the news about ending the show with 15th season get to me more than I could imagine.

As a horror and mythology lover, it didn’t took long for this show to get my attention. Leading actors are great, they gave their characters so much life and it is really easy to bond with Winchester/Casstiel gang (except Mary Winchester – she never really had that spark, but I blame writers for not giving her better story) . You know how the friends are becoming friends? You just spend enough time with those people and if you have any mutual interests, you are becoming friends after time. Supernatural is not masterpiece by any means, but those characters crawl under your skin over the years, so ending the show is like watching your good friend leaving for good.

The print is presented in 1080p/MPEG-4 with a 1.78:1 aspect ratio. I have to say that I am pretty impressed with the image quality this show looks really good in its transfer to Blu-ray. This is one crystal clear looking television show, this show carries a darker gritty look to it as it has from the beginning. Colors are strong throughout and vary from episode to episode to fit with the atmosphere. Details are great especially with scenes where the camera is up close. Black levels are very strong considering that the series has many dark scenes throughout each episode. There is also some light grain and noise throughout the transfer, it never becomes obtrusive or distracting. Fans of the show will not be disappointed the slightest.
Video Quality: 9.5/10

The audio is presented in DTS-HD MA lossless 5.1 mix. Dialogue was front and center with no apparent issues sounding crisp. The soundfield was rather active anytime there were action sequences or effects. I do think that this could have sounded even better with lossless audio mix. Especially with the wonderful soundtrack that this show incorporates based on 70’s heavy metal/hard rock.
Audio Quality: 9/10

I would recommend this show to anyone. Jensen and Jared are perfect in their roles of Sam and Dean Winchester. I couldn’t imagine anyone else doing it anywhere near as good as they are. If you haven’t stopped reading this review halfway through to go and watch the series.
Overall Rating: 8.5/10