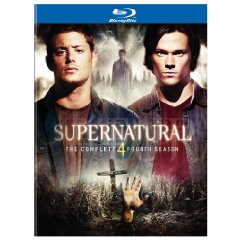 As per usual, Jared Padalecki & Jensen Ackles are outstanding as Sam & Dean Winchester. Jensen is very much the Han Solo character who gets to quip funnier lines and pop culture references throughout; whilst poor old Jared has cranked up the emotional steering wheel 3 notches and is a revelation in the process. These two actors have a chemistry that helps pull the viewer in. Also have to say kudos to Misha Collins as Cassiel, whom I really got used to, even if he does annoy Dean most of the time!

With all the developments in the central story, the conventional monster-of-the-week and comedy episodes are still atypically strong. Previously the humorous episodes tended to be weaker, but now we have some first rate examples in the requisite B&W horror tribute “Monster Movie” and the oft-hilarious malevolent wishing well episode “Wishful Thinking.” They also find some new twists on the monster angle, including the disgusting cannibalistic manbeast the Rougarou in “Metamorphosis,” the murderous Siren (yes, like in Greek mythology . . . kinda) in “Sex and Violence” and a classic bit of magician-oriented horror in “Criss Angel is a . . .” Kripke and company also don’t hesistate to take the show in bizarre directions, as in the “Back to the Future” style “In the Beginning,” where Dean meets his youthful parents and “It’s a Terrible Life,” where Sam and Dean have inexplicably lost their pasts and identities, and instead work in a seemingly generic office. The season has no real throwaway episodes, always maintains the level of stylish eeriness that defined the show, and manages to step up the gruesomeness and intensity a bit from time to time. (“Family Remains” and the vicious ghoul epic “Jump the Shark” are both particularly nasty.)

The story also turns much darker as the two brothers struggle with inner demons: Sam’s addiction to demon blood and power, and Dean’s guilt over what he was driven to do in Hell. The two young actors have stepped up and met the demands of the roles, though the new actress for Ruby seems bland and out of place acting at opposite side of them.

The battle of angels and demons is no ordinary black and white affair. We learn that God is forever silent, and that some angels are shady and would not hesitate a second to sacrifice human lives for a “greater” cause. Lucifer was formerly an angel. “Fallen” angels may or may not be “evil” in Supernatural’s universe. I marvel at how successfully the creator and writers of the show explore the Christian themes and myths. There are countless references to the Bible and Milton’s Paradise Lost, and echoes of Philip Pullman’s His Dark Materials. In so doing, the season goes beyond popular entertainment to the realm of serious fantasy.
Movie Quality: 9.5/10

The print is presented in 1080p/VC-1 with a 1.78:1 aspect ratio. The image quality matches the print from the third season on Blu-ray. Having watched every single episode of this series on broadcast television in high definition, this show looks really good in its transfer to Blu-ray. While some maybe disappointed because they would be expecting a crystal clean transfer, this show carries a darker gritty look to it as it has from the beginning. Colors are strong throughout and vary from episode to episode to fit with the atmosphere. Details are great especially with scenes where the camera is up close. Black levels are very strong considering that the series has many dark scenes throughout each episode. There is also grain and noise throughout the transfer, it never becomes obtrusive or distracting. Fans of the show will not be disappointed the slightest.
Video Quality: 9.5/10

The audio is presented in Dolby TrueHD 5.1 mix. I am surprised that Warner would go with a DD5.1 mix here and not a lossless which doesn’t help the format. Dialogue was front and center with no apparent issues sounding crisp. The soundfield was rather active anytime there were action sequences or effects. I do think that this could have sounded even better with lossless audio mix. Especially with the wonderful soundtrack that this show incorporates based on 70’s heavy metal/hard rock. Here is hoping that Season 5 has a lossless audio mix in the future.
Audio Quality: 9/10

As a fan of this show, this series has been getting better with each passing season. The lower budget of this past season hurt the show a little bit, but it kept on delivering all the comedy, drama, and action bits that we have been used to since season one. On Blu-ray the video and audio are very good and what I expected considering how good the show already looked on broadcast television. Fans of the show will not want to miss out on this excellent release on Blu-ray.
Overall Rating: 8.5/10