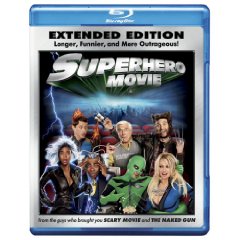 I have never seen a film genre get the life squeezed out of it in the last decade, that with each release it just gets worse. It all began with ‘Airplane!’, taken to new heights with ‘Naked Gun’, and then brought back from the dead with the brilliant ‘Scary Movie’. The genre in general has taken a nose dive over the last decade due to writers going for extreme measures to get laughs that aren’t there. It is no secret as I knew going in what type of movie ‘Superhero Movie’ was going to be. There was one surprise for this reviewer, the film made a worldwide box office total gross of $71 million dollars. With the audiences continuing to support films like this, they will continue to be made.

The film uses the main plot lines from ‘Spiderman’, ‘Batman’, and ‘X-Men’. There are times where the story works well due to some good laughs and other times where you are sitting there wondering why you are watching this film. Our hero Rick Riker (Drake Bell) is the class nerd that gets picked on every single day. While on a trip to a Genetic Mutation lab, he gets bitten by a dragonfly. He begins to feel weird symptoms after having been bit by the Dragonfly. Rick ends up becoming the superhero, Dragonfly, with costume and superpowers.

Rick lives with his Aunt Lucille (Marion Ross) and Uncle Albert Adams (Leslie Nielson). They are every bit involved in his life and are actually entertaining adding some funny moments of their own to the mix. Leslie Nielson is the king of spoof films. Then there is his love interest next door, Jill (Sara Paxton). It was rather disappointing that she was just used mainly as eye candy with not much else to do in the film. While having superpowers is great, there are also baddies that Rick must contend with. We have our Harry Osbourne/Green Goblin/Dr. Octopus like villain with Lou Landers (Christopher McDonald). Landers gains powers after his testing to become immortal goes bad. His goal is to take everyone’s souls out of their bodies by sucking them into his body.

The ‘X-Men’ also make an appearance through Professor Xavier (Tracy Morgan). While this could have been presented in a more tasteful way, you are left shaking your head. We see his wife Mrs. Xavier (Regina Hall) in a wheelchair and they also have children that are handicapped. Just a very distasteful scene if you were to ask me, and even worse is the gags with the wheelchair.

There are gags and jokes throughout the film that are hit or miss. The problem here lies when there aren’t any ongoing jokes; these are the times when you see the gapping holes in the film. It doesn’t have to do with the performances as the actors involved do a good job. It’s the story that was used here that ends up doing more bad for the film than good. The ‘been there, done that’ motto is really good for this film considering that I almost feel like I am watching a cheap rehash of ‘Spiderman’. Where the original ‘Scary Movie’ succeeded so well was that it was a written very well for a spoof and it helped that the acting team was top notch even with a few relative unknowns at the time.
Movie Content: 3/5 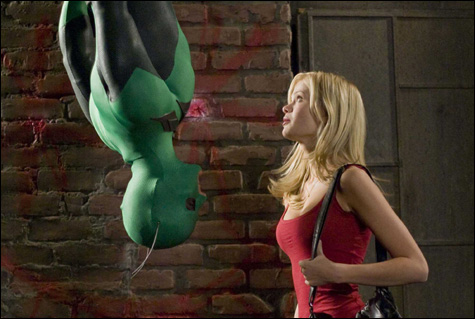 The print is presented in 1080p/VC-1 encode with a 1.78:1 aspect ratio. The film is very colorful throughout which is what I expected for a film of this nature. Colors are vibrant carrying a more natural color palette. Blacks are also very strong and deep. With strong colors and deep blacks, it brings out the fine details. Fleshtones also look very natural. Details are very good.  The print is as clean as a whistle with a very pristine look.
Video Quality: 4/5

Audio is presented in Dolby TrueHD 5.1 mix. Dialogue through the center channel is very clean and crisp. The action sequences provide for some nice atmosphere in the soundfield. Between the sound effects and action sequences, there is a lot going on that will shake your room. This is a well balanced mix between the dialogue and soundfield.
Audio Quality: 4/5 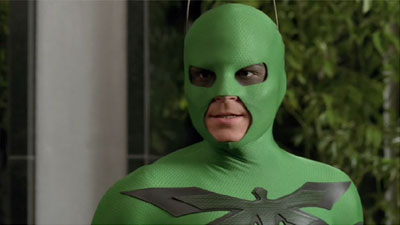 Extras are presented in both high and standard definition.
Special Features: 3.5/5

While ‘Superhero Movie’ is not going to win any awards for best comedy spoof, it has some entertaining moments. It will never reach the heights of ‘Scary Movie’, but with excellent video and audio, the Blu-ray version of the film is the one to check out. I recommend ‘Superhero Movie’ as a mere rental if you are a fan of spoof comedies.
Overall Rating: 3.5/5 (Rental)