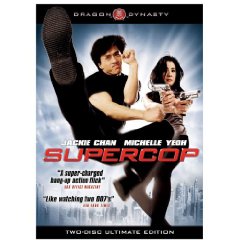 Originally titled Police Story III in  Hong Kong , the dubbed version of the film released in the United States is titled ‘Supercop’. The film was originally released on DVD in 2001 under Disney’s Buena Vista brand. The new remastered version of the film is released by Dragon Dynasty in a special 2 disc ultimate edition providing a plethora of features for one of Jackie Chan’s and Michelle Yeoh’s action packed films.

Hong Kong cop Kevin (Jackie Chan), who alternately charms and kicks his way through the underworld as a champion for justice. This time out Kevin is goes to mainland China undercover to infiltrate a drug ring. Kevin’s introduction to mainland martial arts is a delightful sequence, capitalizing on Chan’s humor and athletic skills in equal doses. From this brisk opening, the action continues to intensify right up to its stunt-studded conclusion in Kuala Lumpur.

In this Chan effort, co-star Maggie Cheung has less to do than in previous Police Story flicks. Action star Michelle Yeoh joins the team with her high style of kicking and pirouettes as Kevin’s mainland counterpart. The actor’s have a good time going through the paces and performing the stunts. Once again, the final credits provide a glimpse into the reality of the arduous stunts with a number of out-takes. Wipe that blood off Jackie.
Movie Content: 4.5/5 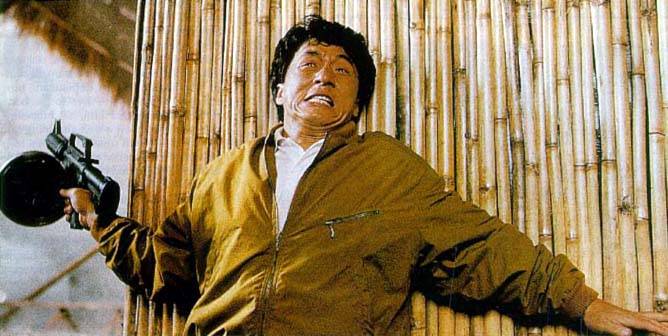 The print is presented in 2.35:1 aspect ratio with anamorphic widescreen for the first time on DVD. Colors are bright and consistent with a nice sharp look. Black levels are deep. Flesh tones looked good and natural. This is a very nice upgrade from the previous DVD release.
Video Quality: 4/5

The audio is presented in Dolby Digital 5.1 mix. The audio presentation has plenty of punch and very dynamic. This is an aggressive mix during the action sequences providing an atmospheric experience. The sound makes you feel as if you are a part of the action. Dialogue comes through the center channel rather clear.
Audio Quality: 4/5

‘Supercop’ is one of Jackie Chan’s finest performances and with the addition of Michelle Yeoh. This is definitely an upgrade over the previous DVD release with better video (anamorphic transfer) and audio. Plus the addition of 2 discs worth of extras is a fan’s dream.
Overall Rating: 4/5 (Purchase)