Posted in DVD Reviews by George Theofanopoulos on 18 February 2011 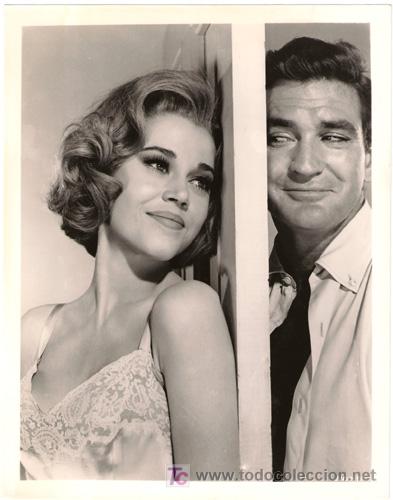 Before she became a great star and a two-time Academy Award® winner, Jane Fonda was a screen ingénue who sent a string of bubbly romantic comedies soaring, including this charmer from the prolific pen of Norman Krasna (Bachelor Mother, The Devil and Miss Jones). Fonda portrays a virginal miss blessed with long limbs and a knockout profile who runs off from her fiancé (Robert Culp) to the swingin’ pad of her brother (Cliff Robertson) and then into the arms of a guy she meets on the 5th Avenue bus (Rod Taylor) — all the while trying to decide if she’ll say “yes” before she says “I do.” Filmed on location, Sunday in New York is a fun, sophisticated romp set to a hip Peter Nero score that features Mel Torme singing the title tune. 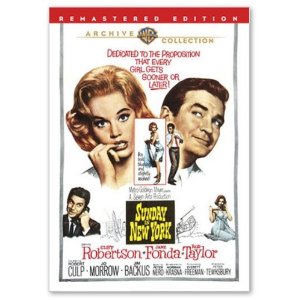 Eileen Tyler (Fonda) is twenty-two years old and is suffering from her breakup with Russ (Robert Culp). She comes to New York City to visit her brother Adam (Robertson), who is an airline pilot. Eileen confides to her brother that she thinks she may be the only 22-year-old virgin left in the world. Adam assures her that sex is not what all men look for and insists he hasn’t slept around. Of course, Adam is lying and is in hot pursuit of a tryst with his occasional girlfriend Mona. However, Adam’s date with Mona has a series of job related interruptions. Meanwhile, Eileen decides to see if she can have some fun for herself in New York, and seems to find the perfect candidate in Mike (Taylor), a man she meets on the bus. But things get complicated when Russ pops in with a proposal and a mistaken assumption.

In a review of the playwright’s “frank screen version” of the play, Bosley Crowther characterized the film as another in a series of films that dwelled on a subject first brought to the screen ten years earlier in The Moon Is Blue: “There once was a time when the candor of Mr. Krasna’s mildly popular Broadway play about an Albany girl who struggles bravely with the problem of her virtue during a rainy afternoon in New York might have caused the Production Code people a moment or two of anxious pause. They might then have thought it a bit too racy for youthful and innocent ears”;[1] on the film itself, Crowther said “the extent of the film’s disconcertion and delight for a viewer will depend upon how prone one may be to a juvenile quandary and to the nimble performing of a pleasant cast. The twists of the plot are downright hackneyed—the confusions of opening the wrong doors, mistaking people and getting caught in dishabille. But the actors are all attractive, and so long as one can go along with them in their valiant attempts at pretending this is hot stuff, one may have a good time.”

According to Time magazine, “Sunday in New York is another brightly salacious Hollywood comedy about the way of a man with a maid who just may. ‘This motion picture,’ leers an announcement flashed on the screen as a teaser, ‘is dedicated to the proposition that every girl gets . . . sooner or later.’ As usual, winking wickedness turns out to be mostly eyewash, but the plot—more to be pitied than censored—gets a buoyant lift from stars Jane Fonda, Cliff Robertson and Rod Taylor. All three abandon themselves to the film version of Norman Krasna’s trite Broadway farce with disarming faith, as though one more glossy, glittering package of pseudo sex might save the world.”

this terrific rainy day movie not available on DVD? What a pleasure to watch three very handsome men – Rod Taylor, Cliff Robertson and Robert Culp – stumble all over themselves as each tries to win the heart of the one they love. And Jane Fonda was such a pleasure to watch as the innocent ingenue who did not want to remain so innocent. Like all of the Warner Archive releases, this DVD is being produced on demand and doesn’t contain any bonus features beyond the movie itself.
Overall Rating: 9/10