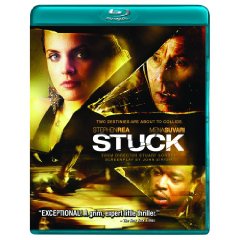 I remember viewing the trailer for ‘Stuck’ back in late 2007 and thinking to myself that this could be a rather interesting story. The more I thought about it after viewing the trailer, parts of this film’s story is based on a true story. ‘Stuck’ was directed by Stuart Gordon and initially premiered at the Cannes Film Festival in May 2007. ‘Stuck’ was released by Image Entertainment in a very limited theatrical run, which grossed a total of $67,000.

As I mentioned earlier that this film is based on a true story, this incident did occur to man named Gregory Biggs in Fort Worth, Texas when he was struck and killed by Chante Jawan Mallard. I remember hearing about this being reported on the news, it did freak me out. In ‘Stuck’ Brandi Helper (Mena Suvari) is a nurse’s assistant in a nursing home taking care of the older residents. There were some scenes here that were a bit disgusting to some in the nursing home, especially an older guy that takes a fecal dump in his bed and then they show Brandi washing him off. While we see Brandi’s life, then things turn to a homeless man by the name of Tom (Stephen Rea) who we see wandering the streets. This continues as we go back and forth between both characters lives.

One late evening as Brandi is driving home after partying all night and taking some drugs from her boyfriend Rasheed (Russell Hornsby) is not paying attention as she is driving. She gets on the cell phone and starts looking the other direction, as Tom is crossing the middle of the street, Brandi barrels right into Tom. Tom goes crashing through Brandi’s windshield. Now Brandi starts to freak out that she hit Tom, but is blaming him along the whole ride that he jumped out in front of her. Brandi continues to drive around with Tom in her windshield until she goes home and parks the car in the garage with him still through the windshield.

Things now are going sour for Brandi because not only has she nearly killed a man, but it also is going to cause issues for her at work. Brandi is doing so well at work that she is in line for a promotion, but soon her tardiness and no-shows to work will pretty much ruin her chances. As a man is ‘Stuck’ dying in her garage, Brandi is ‘Stuck’ in her own little world trying to figure out a way to get out of this jam.

The acting is really well done with Suvari and Rea, and their emotions really pull you into the film. Throughout the entire time, I was feeling so many different emotions that this is one film that not only makes its characters ‘Stuck’, you feel the same way. There were so many times where I was horrified, laughing, and then disgusted. This movie has it all and it is rather strange that this was the direction that was taken here, but it works. While both Suvari and Rea are in fear of the predicaments that they are in, it’s the final act of the film that really pulls things through at the end with an ending I didn’t expect. The turn at the end of the film will leave you with your jaw dropped to the floor.

Picture/Audio Quality
The print is presented in a 1080p MPEG-4 AVC transfer with a 1.78:1 aspect ratio. The print is rather clean throughout with colors having that washed out look. Throughout the entire film, there are a lot of night scenes which keeps the film looking rather dark. Blacks do look deep with print. The audio is presented in DTS-HD MA 5.1 mix. While the film only uses the rears a few times throughout, sound effects when they do come through sound very well. The dialogue was clean and clear through the center channel.

I highly recommend giving ‘Stuck’ a chance on Blu-ray. The film starts off rather slow at the beginning, but after a good 20 minutes the film starts really kicking into high gear. Both Suvari and Rea pull in excellent performances in ‘Stuck’.