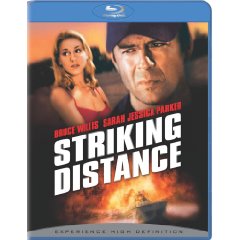 Tom hardy is a maverick cop who is not afraid to rock the boat in pursuit of a sadistic serial killer. Demoted to river patrol after suggesting the killer may be a fellow cop he initiates an unauthorized investigation which kicks the high-powered plot into overdrive.

This movie is absolutely awful; one of several Willis flops from the mid to late 90’s (“Color of Night”, “Die Hard With A Vengeance”, “Last Man Standing”, “The Jackal”). However, his other films at least had semi-coherent, albeit predictable, plot lines and decent acting. “Striking Distance” is full every cop/thriller cliché you can think of, the only difference being the fact that Willis plays a water policeman, which by the end of the movie is neither here nor there.

The story sees Willis’ character’s father (also a police officer) en route to a policeman’s ball is throw into a chase scene in which the car (naturally) crashes, and is killed. Though it seems his death is not as a result of the accident, but rather from bullet wounds. Fast-forward to a few years later and bodies are being found dumped in the river that Willis’ character patrols. Of course, this all becomes serious when it is apparent the same killer, possibly a serial killer, is committing the murders. Now the hunt is on (surprise, surprise) and Willis suspects this may all be somehow related to his father’s death.

What could have been an intelligent and interesting story soon slides below the limbo bar of film mediocrity. Sarah Jessica Parker “co-stars” as the typical love interest, but she has no chemistry with Willis she barley has more than a paragraph of dialogue with him. This is just one of many pointless characters peppered throughout the film. The most annoying one being some cop who has it in for Willis, but you’re never sure why, and his confrontations are used as filler (i.e. they have no connection to the murder or to any other plot point). There is an absolutely pathetic scene at the end of the film where after mouthing off at Willis, he has to be held back after Willis makes some half-baked one liner. Watch with awe how terribly unconvincing the acting is!
Movie Content: 3/10

The print is presented in 1080p/AVC MPEG-4 with a 1.85:1 aspect ratio. This is not the greatest print on high definition, but it is also far from the worst. I found colors and the overall image to be on the softer side. Blacks are solid throughout offering excellent depth. Details aren’t the greatest either as they are hit or miss with wider shots taking a hit in quality. This is better looking than the DVD, but I was not impressed with this high definition transfer.
Video Quality: 6/10

The audio is presented in Dolby TrueHD 5.1 mix. I found the soundfield to be on the lighter side during any scenes that could have pushed the rears. The subwoofer wasn’t being used as much either. The dialogue portions of the film come through very clean. My front speakers were carrying most of the load as this is a front heavy film.
Audio Quality: 7/10

I was never a fan of ‘Striking Distance’ on DVD and my opinion has not changed with the Blu-ray release. On Blu-ray this film is a mixed bag with video and audio that could have been better.
Overall Rating: 5/10