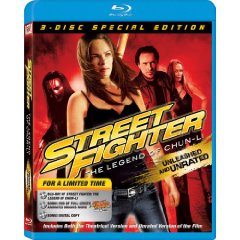 The origin story of the characters from Capcom’s popular Street Fighter video game is detailed in The Legend of Chun-Li, a live-action martial arts thriller from Doom helmer Andrzej Bartkowiak. Smallville’s Kristin Kreuk gives a spirited turn in the title role, a concert pianist turned global crime fighter who cracks her share of heads while in pursuit of the mobsters who have kidnapped her father. Neal McDonough and Michael Clarke Duncan glower effectively as Bison, the nefarious mastermind behind the abduction, and his henchman, Balrog, respectively. The film’s offbeat cast, which includes Chris Klein and Moon Bloodgood as detectives, Black Eyed Peas singer Taboo as the claw-wielding Vega, and Hong Kong stars Pei-pei Cheng, Josie Ho and Edmund Chen in supporting roles, is the most inspired element of the film, which relies too often on well-worn action and kung fu movie clichés to fill out moments between fight sequences; the film’s target audience–fans of the game–may find this less engaging than younger, less discerning moviegoers with a yen for any flavor of punch-up.

The director took one of the stories from the original “Street Fighter” movie (Chun-Li wants to get revenge for what M. Bison did to her family) tried to make a serious movie, only based on that one story. There just isn’t a lot there. So, to pass the time, we see Chun-Li mourning her mom’s death, a woman who had a total of two lines in the whole movie! Also, we have Chun-Li crying as she leaves her house to go to Bangkok, saying goodbye to each of her house servants, who are also people that we care nothing about. Then we see Chun-Li living in Bangkok, walking around, looking around, sleeping. I mean, what the hell? You might think I’m exaggerating, but trust me…nothing happens. The fights are short, poorly choreographed, and few and far between. The movies should have been called “Street Cryer” or “Street Walker” or “Chun-Li tries being Homeless.” The fighting takes a back seat to the artificial drama that the film is trying to create. There’s also a supernatural aspect to the film which is poorly developed and felt like it was tacked on. I will say this, though, that Kristin Kreuk does the best acting job by far in the movie, which is a much better performance than the movie deserved.

The biggest problem for me is the film’s pacing. Action scenes themselves are decent, and at some parts very well-choreographed, but they are often too short and not enough fight scenes. I didn’t care for the film’s weak story and corny one-liners.
Movie Content: 5/10

The print is presented in 1080p/AVC MPEG-4 with a 1.85:1 aspect ratio. Despite the contents of the film isn’t that great this is one of those films that will make you happy being an early adopter of Blu-ray. From the colors to the details, your jaw will drop if you look for some of the superb details. Colors are vibrant providing an excellent looking picture. Flesh tones are natural and accurate looking. Blacks look inky. Details are where this film shines the most with the camera even panning away in many scenes.
Video Quality: 9/10

The audio is presented in DTS-HD MA lossless 5.1 mix. The audio mix is offers some really good range into the soundfield. The oundtrack took advantage of the rears adding some immersion into the soundfield. It really helps pull the viewer into the film and this is how high definition films should sound. Dialogue is excellent through the center channel offering a nice and clean sound.
Audio Quality: 9/10

While the film lacks in story, the special features are loaded to the brim with this 3 disc set.
Special Features: 9.5/10

While I was not a fan of the story and the film itself, this package does offer a nice video, audio, and special features set that are fantastic. If you are a fan of the film then picking this setup is a no brainer.
Overall Rating: 8.5/10