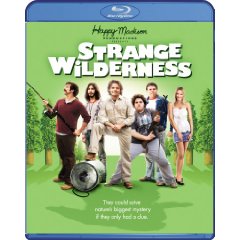 As lunkhead comedies go, Strange Wilderness never creates the necessary frisson to keep a viewer engaged by the film’s endless parade of marijuana jokes, gross-out sight gags, and celebrations of rank stupidity. Which is too bad, because the cast would be ideal for a smarter version of a stupid movie, but they come off as largely wasted here. Steve Zahn (That Thing You Do) plays Peter Gaulke, heir to a wild animal television program called “Strange Wilderness,” but too out of it to keep up his late father’s congenial yet focused legacy. With the show’s ratings plummeting (even at a 3 a.m. broadcast time), Peter attempts to rescue the series by traveling to Ecuador in search of Bigfoot. Accompanied by a crew of idiots (Allen Covert, Jonah Hill, Justin Long) and one comely lass (Ashley Scott of TV’s Jericho), Peter heads into one obstacle after another: sharks, piranha, pygmies, Mexican border guards, a crazy tracker (Robert Patrick), and a nitrous high. After awhile, the lowbrow hijinks all run together and one feels a bit trapped, desperately awaiting final credits. But there are a couple of recurring comic ideas that salvage the movie somewhat, especially the use of stock footage of animals accompanied by Peter’s absurd voiceovers. (“The shark can be found only in two places: the northern and southern hemispheres.”)

The cast of Steve Zahn, Justin Long, Jonah Hill, Allen Covert, and Peter Dante have the comedic talent to make any poorly-written film enjoyable, but there was obviously a lack of well thought-out material available, and this film plays like a series of thrown-together SNL skits that didn’t make the cut. There are a lot of laughs in this film based off of many zany scenes. Just do not expect going in that this is going to be a comedy that will have you barreling over in laughs. Some of the scenes could also come off to some as offensive, providing some dirty humor.

If anything, its Steve Zahn and Justin Long that I found the most entertaining in the film from really making me jump to the remote from shutting this one off. Steve Zahn has fallen off of the Hollywood bus the last few years, but there is something about his comedy act that helps comedy films where he is best as the sidekick. The rest of the cast felt like they were going through the motions which ended up hurting the film even more.
Movie Content: 2/10

The print is presented in 1080p/AVC MPEG-4 with a 2.35:1 aspect ratio.  This is a very inconsistent print which can be clean in some scenes and a bit soft and murky throughout. The strange part of this print is that the details are good and you can clearly see the verbiage on signs, cracks in the roads, and the greenery outside looks great as an example. Even though the print is soft, it is a very colorful film. Fans of the film will not be disappointed.
Print Quality: 7/10

Audio is presented in a Dolby TrueHD 5.1 mix. This film is mainly driven by dialogue through the center channel with very little in special effect sounds in the rears. I did find it disappointing that this mix sounded way too low, especially the dialogue. It just felt like the mix was too low and could have used a bit more oomph. This is a mix that could really make you wonder if you’re watching this film on Blu-ray at times.
Audio Quality: 7/10

Even though there were some hilarious moments throughout ‘Strange Wilderness’, I just didn’t enjoy this comedy as much as I thought. I just wish that Paramount would put more priority on other catalog titles in their vault over releasing mediocre films in high definition. Fans of the film will be happy, while those possibly interested just give this one a rental.
Overall Rating: 6/10