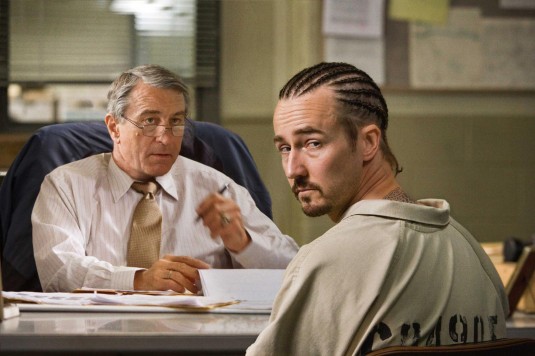 Edward Norton is always fascinating to watch–something slippery always lingers behind his eyes. In Stone, Norton plays a convicted arsonist nicknamed Stone who’s desperate to persuade his parole officer, Jack Mabry (Robert De Niro), to argue for his early release–so desperate that he asks his wife, Lucetta (Milla Jovovich, The Fifth Element), to seduce Mabry. But while these machinations play out, Stone starts having a spiritual awakening … or is this another attempt at manipulation? Director John Curran and Norton worked together previously on The Painted Veil, and they clearly have a rapport: Norton’s performance is fluid and sinuous, working its way into Mabry’s consciousness and, potentially, the audience’s. De Niro is, of course, solid, though he projects such a steely will that it’s difficult to accept him as a man who succumbs to base appetites. Writer Angus MacLachlan wrote the luminous Junebug; while Stone doesn’t manage the same rich humanity–despite the excellent acting by all involved, the story feels cramped and schematic–there are strong passages. But fundamentally, it’s Norton who makes the movie worth watching; even the scenes he’s not in feel like they’re about him, how his influence ripples out into the people around him. 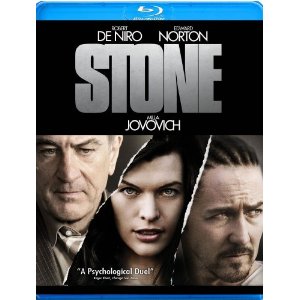 ‘Stone’ was not received well critically. It was marketed as a prison drama in which Norton and De Niro tensely face off. It isn’t. Once you get over that fact and accept the movie on its own terms, your mind and heart can be opened by its powerful reflections.

I believe great cinema works best as a mirror. This describes ‘Stone’; not all viewers will see the same story. Some will interpret Norton as a lying sociopath, while I saw him as a man who maintains the upperhand through real–though accidental–spiritual enlightenment. Actually, guilt and enlightenment are the two main undercurrents in the characters’ stories. Norton seeks his enlightenment through a religion that helps him to shut his fast mouth and listen; De Niro seeks escape from his “honest and upright” lifestyle through sexual enlightenment. De Niro’s life dissolves while Norton’s evolves, and the process is nothing short of compelling. You may not expect the end result.

Some interesting sidebars: The religion Norton seeks out is referred to as “Zuckangor: The Religion of the Light and Sound of God,” startlingly similar to Eckankar (which I was recently and coincidentally introduced to in a local bookstore). The soundtrack reflects this religion, so listen close for slowly building tones that indicate important moments in character development. Also on this note, watch Norton’s hair.
Movie Content: 8/10

The print is presented in 1080p/MPEG-4 with a 2.40:1 aspect ratio. Colors are deep and well saturated throughout the entire presentation. Blacks are strong and almost inky at times. Nowhere did the image ever appear soft with such strong colors and black levels. Flesh tones were also natural. The film carries a very clean look throughout which some might enjoy, while others might not be too happy with.
Video Quality: 9/10

The audio mix is presented in DTS HD 5.1 Master Audio lossless track. “Stone” is a dialogue-driven film that is mostly front and center channel driven. There really wasn’t anything that stood out, audio-wise especially for the surround channels. If anything, it’s all about the dialogue and the dialogue on the lossless soundtrack is crystal clear. I detected no hiss or any audio problems while watching the film.
Audio Quality: 8.5/10

I think this was a brilliant film — a deep, thoughtful, poetically-directed tome on the unanswerable spiritual questions of life and a probing, disturbing snapshot of the current state of the American soul — all wrapped up in the guise of a neo-“post-American greatness” psychological film noir.
Overall Rating: 7/10