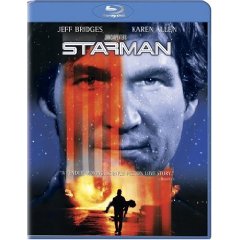 While most movie buffs are likely to call Halloween the best movie from John Carpenter, others–die-hard romantics and anyone who cried while watching E.T.–might vote in favor of the director’s 1984 hit Starman. It’s easily Carpenter’s warmest and most beguiling film, and the only one that ever earned an Oscar nomination. That honor went specifically to Best Actor nominee Jeff Bridges for his performance as an alien visitor to Earth who is knocked off course and must take an interstate road trip to rendezvous with a mothership from his home planet. To complete this journey he assumes the physical form of the dead husband of a Wisconsin widow (Karen Allen) who responds first with fear, then sympathy, and finally love. Carpenter’s graceful strategy is to switch the focus of this E.T.-like film from science fiction to a gentle road-movie love story, made believable by the memorable performances of Bridges and Allen. It’s a bit heavy-handed with tenacious government agents who view the Starman as an alien threat (don’t they always?), but Carpenter handles the action with intelligent flair, sensitivity, and lighthearted humor. If you’re not choked up during the final scene, well, you just might not be human.

Jeff Bridges gives us a truly believable and touching performance, he was deservedly Oscar nominated and Karen Allen is simply gorgeous as the wide eyed widower who cannot quite believe what is happening to her. The two carry the film very well and the supporting cast especially Charles Martin Smith are also excellent. The movie succeeds on just about every level, emotionally it’s truly touching and scenes such as the deer outside the diner and when Karen Allen describes the definition of love are real chokers.

The gorgeous Arizona landscape looks sumptous and the filming overall is first rate, John Carpenter clearly demonstrates his mastery of filmmaking throughout every scene. Forget the fact that the special effects could have been better, hey this was 1984 and way before CGI overpowered us with overblown special effects. By contrast some movies made today are so full of totally unnecessary special effects that it’s no longer clear whether what you are seeing is real or animated.This movie doesn’t need to rely on this level of interference, it works on an emotional and human level.
Movie Quality: 9/10

The print is presented in 1080p/AVC MPEG-4 with a 2.40:1 aspect ratio. I am happy to report that this new high def transfer actually helped bring this film to life as opposed to the previous fullscreen DVD release. Colors are soft throughout the entire print with a few instances of some very strong hues. Blacks offer some excellent depth. There is some mild grain throughout the film, but never becomes distracting. The print is free from any artifacts or damage offering a clean looking film. Fans of the film will not be disappointed.
Video Quality: 8.5/10

The audio is presented in Dolby TrueHD 5.1 mix. This is a mild mix that will not have your home theater cranking, but it does get the job accomplished. Due to the film’s age it did meet my expectations. The score actually takes well advantage of the upgrade to high def audio helping provide atmosphere. Dialogue is clean and crisp with no apparant issues.
Audio Quality: 7/10

‘Starman’ arrives on Blu-ray nearly 25 years later with a stellar appearance on the high definition format. It is disappointing in the lack of special features, which would have been a nice addition. If you are a fan of the film this is highly recommended.
Overall Rating: 8/10