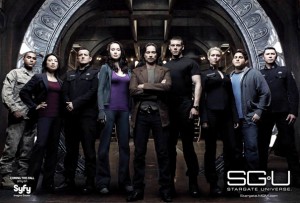 A group of soldiers, scientists and civilians, fleeing an attack, is stranded billions of miles from Earth on an Ancient ship known as the Destiny. Locked on an unknown course, they must fight to survive and find a way home. The danger, adventure and hope they find on board the Destiny will reveal the heroes and villains among them. 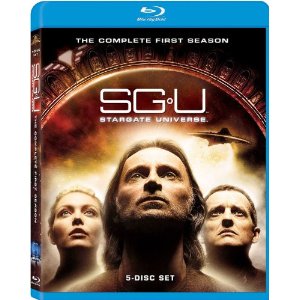 Outstanding science fiction classics Stargate SG-1 and Atlantis had pretty much run their course, especially with the cartoonish “Michael” story arc from Atlantis.

With the advent of Stargate: Universe, the producers and writers, and SyFy Channel wanted something different from the other Stargate franchises.
They wanted the kind of restless, jiggly camera work that film students like, because it makes them feel “edgy” instead of doing the same old thing. Rather than finding it creative, I find it just plain annoying. In fact, it gives me a headache. Unfortunately, this type of camera work has spread throughout TV and the movies like a malevolent virus.

SGU is just recycled premises from the 60’s programs Lost in Space and The Time Tunnel and the plots are equally as “sophisticated” as their 60’s counterparts. To this, they added a shipload of annoying characters (apparently having tried it with McKay, they fell in love with the idea and tried it with an entire cast), plus one or two 40-watt bulbs for lighting, and created a dark soap opera in space.

There will always be those of modest intellect and questionable taste who will soak up any drivel that is served up to them on their television set. However, the rest can vote with their feet and wallets, and refuse to support second-rate programming.
Movie Content: 6/10

The print is presented in 1080p/AVC MPEG-4 with a 1.77:1 aspect ratio. Colors are strong throughout the print with natural looking Flesh tones. Black levels are deep. There is also grain throughout the print. Fleshtones are excellent with contrast is impressive, and depth and dimension throughout each episode. Detail is also exceptionally well done.
Video Quality: 8/10

The audio mix is presented in DTS HD 5.1 Master Audio lossless track. This show presents both dialogue heavy scenes and several action sequences. Dialogue came through the center channel very clean offering a nice depth. The rears do get usage during times when there is gun fire, battles, and the spaceships flying.
Audio Quality: 7.5/10

I was looking forward to this series because I am a fan of SG-1 and Atlantis, as well as the movies. I was very disappointed. The only similarity to the other shows is that there is a Stargate and it takes place in space. The humor and interesting science-based stories aren’t there, the main characters aren’t likable, and the overall feel is too dark. .
Overall Rating: 6/10