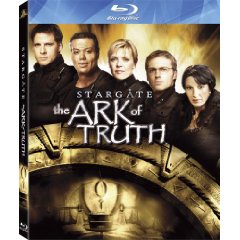 The ‘Stargate’ universe not only grew over the last 15 years, it had a mass explosion. It all started with a movie in 1994 that starred Kurt Russell and James Spader. In what was a big budget science fiction film at the time it did quite well with a worldwide total gross of $196 million dollars at the box office. The film did so well that a television series was created on Showtime, ‘Stargate SG-1’ with former ‘MacGyver’ star Richard Dean Anderson at the helm. The show wouldn’t last long on Showtime, after five years they would can it for only the SciFi Channel to pick it up. Then the spinoff was announced, ‘Stargate: Atlantis’, for only to be concluded with its fifth season. This franchise has been through one rough patch after another.

The new feature film ‘Stargate: The Ark of Truth’ continues where we left off with Season ten. The SG-1 team is on a search for a deadly weapon from the Ancients. This is the only weapon in the entire universe that can defeat the Ori. While the Ori were defeated in season ten, the team is still worried that they are still alive. The Ori’s come back strong with their new human/hybrid soldiers the Priors. The Ark shines a beam of light on those in the vicinity which will make them believe that the Ori aren’t gods.

The SG-1 team, Jackson (Michael Shanks), Vala (Claudia Black) and Teal’c (Christopher Judge), Mitchell (Ben Browder) and Carter (Amanda Tapping) try to find the ‘Ark’. They also have to prepare for an all out assault by the Ori on the planet Earth.

I will recommend that you do not watch this film until you have seen the earlier seasons. There is just so much history that has been built up in the storylines over the ten seasons that going into this film without that knowledge it makes it harder to understand. What is great though with this Blu-ray is that there is a nine minute prologue going over the events leading to ‘The Ark of Truth’.
Movie Content: 4/5 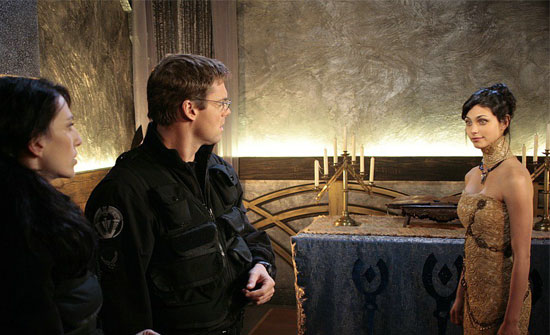 The print is presented in 1080p/AVC MPEG-4 with a 1.78:1 aspect ratio. I was rather surprised at the amount of noise in this print. It almost at times overwhelms the image during the darker scenes, and is also apparent during the light scenes. Colors are strong throughout the print with natural looking Flesh tones. Black levels are deep. There is also grain throughout the print. This print was handled almost like an extended television episode.
Print Quality: 3.5/5

The audio is presented in DTS-HD MA lossless 5.1 mix. This feature film presents both dialogue heavy scenes and plenty of action. Dialogue came through the center channel very clean offering a nice depth. The rears do get usage during times when there is gun fire, battles, and the spaceships flying.
Audio Quality: 4/5

Fans of the ‘Stargate’ television show will not be disappointed one bit. I have seen the first few seasons of the show, so most aspects of ‘The Ark of Truth’ make sense. I do recommend this for fans as it ties up all of the loose ends in season ten and caps off the Ori storyline.
Overall Rating: 4/5