Posted in DVD Reviews by George Theofanopoulos on 18 June 2011

Season 2 opens where the Season 1 cliffhanger left off. The Lucian Alliance has seized control of Destiny and Colonel Young and the crew are about to be executed. Their only hope lies in a handful of surviving civilians and soldiers, led by Eli and Dr. Rush. In the aftermath of the incursion, the Icarus survivors are beset by new challenges from alien mutation to the ongoing schemes of Rush. But all of this proves secondary to an even greater revelation: The truth behind why the Ancients launched Destiny.. 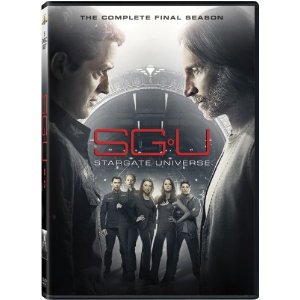 This entire show is an absolute catastrophe. Boring, illogical, characters that no one cares about, and stories that are horrendous at best. To put a “Stargate” label on this garbage makes a mockery of the franchise.

This show is truly the absolute worst in the “Stargate” franchise. Heck, I don’t even consider this to be part of the real Stargate franchise, since it is a complete Battlestar Galactica rip off. This wouldn’t be bad in itself if it were done well, but this show is just atrocious. From bad writing, to bad acting to horrible interaction of characters, this show blows. To slap the “Stargate” label on it and peddle it as part of the franchise is unforgivable. This show is so bad it wouldn’t even be considered science fiction by most fans. For all you true fans of the Stargate universe (the franchise, not the show) stay away, you have been warned.

This show was one huge reason why MGM went bankrupt, and not even James Bond and his franchise could save them. The show was anything but a “Stargate” show. This series had absolutely nothing to do with the Stargate Universe other than it had a stargate in it. True fans of the Stargate Universe shudder at the mere mention of this atrocity. Thank God and all that is holy that we have been put out of our misery by its cancellation. The 2 seasons it was on was 2 seasons too many.
Movie Content: 5/10

The series has been a soap opera with occasional dollops of science, but never anything awe-inspiring. The Star Trek and other Stargate series introduced dozens of amazing inventions, temporal paradoxes, alien races–in other words, lots to remember.
Overall Rating: 5/10