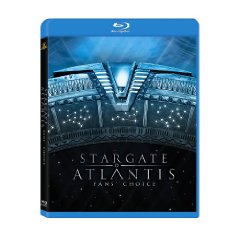 For the first time ever on Blu-ray, here are extended versions of your two favorite episodes from the celebrated Stargate Atlantis™ series – without commercial interruption, and in packaging you designed!

The exhilarating, feature-length pilot episode, Rising, sends a brilliant team of scientists through a Stargate to the legendary city of Atlantis. But not only is the city about to be engulfed by ocean water, an enemy appears who threatens everyone in the Pegasus Galaxy! And in the white-knuckle, lengthened Enemy at the Gate from Season 5, as the team tries to disempower Wraith hive ships, the Wraith discover coordinates that will allow them to destroy Earth!

This was the last year that the galaxy-hopping ‘Stargate Atlantis’ would meet its premature finale. This came so unexpectedly considering that the show was doing so well in the ratings and with the fanbase. It was the producers that had their minds on the new ‘Stargate Universe’ television show premering this fall that helped in taking this show off the air. What this fan’s choice Blu-ray does is takes the two part pilot and the series finale giving them a high definition update for the franchise. While this is great start for the series, the problem is that you get the first and final episode so good luck in reeling in new people.

But it’s nice to see the solid premiere and finale of this series, both for nostalgia and for a glimpse of how much changed in the five seasons between them; the finale also is left open for the forthcoming “Stargate: Extinction” movie. And they are both pretty good episodes: they’re heavy on plot, with lots of nasty Wraith stuff, space battles, and dialogue both funny.
Movie Quality: 9.5/10

The print is presented in 1080p/AVC MPEG-4 with a 1.78:1 aspect ratio. This new high definition transfer shines as fans have been waiting forever for SG-1 or Atlantis to hit Blu-ray. holds a rather soft image throughout with a warmer color palette. Details aren’t lacking at all, offering a very detailed image throughout each episode.  Blacks are solid throughout the print. There is very minimal grain throughout the print. Fans of the show will be happy……….Now MGM, please bring us the season sets in high definition.
Video Quality: 9/10

The audio is presented in DTS-HD MA lossless 5.1 mix. The series special effects really takes advantage of the soundfield immersing the viewer. The rears get a fairly good work out with a dynamic sounding experience from time to time. This is about what I expected. Dialogue is well balanced and very clean through the center channel.
Audio Quality: 9/10

There are no special features which is a shame and then add these eco-friendly Blu-ray cases that are absolutely horrible. I want to save the planet, but these disc holders can ruin your cover art.
Special Features: 0/10

We were promised ‘Stargate Atlantis’ season sets on Blu-ray which still has not happened, but we do get this fan’s choice 2 episode disc set. On Blu-ray the show sounds and looks great as this is a nice preview for what we should expect. If you are a fan this is a no brainer.
Overall Rating: 8.5/10