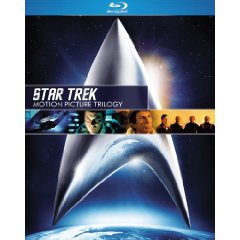 TPrepare to embark on an epic three-part adventure starring the legendary crew of the U.S.S. Enterprise as they sacrifice their lives, ship and freedom to save the universe from imminent destruction. Spanning across three motion pictures, the Star Trek: Motion Picture Trilogy is the ultimate story of heroism, duty and friendship that will thrill old and new fans alike. The films have been digitally remastered and The Wrath of Khan has been fully restored in high definition with brilliant picture quality and 7.1 Dolby TrueHD.

Although Star Trek: The Motion Picture had been a box-office hit, it was by no means a unanimous success with Star Trek fans, who responded much more favorably to the “classic Trek” scenario of Star Trek II: The Wrath of Khan. Inspired by the “Space Seed” episode of the original TV series, the film reunites newly promoted Admiral Kirk with his nemesis from the earlier episode–the genetically superior Khan (Ricardo Montalban)–who is now seeking revenge upon Kirk for having been imprisoned on a desolated planet. Their battle ensues over control of the Genesis device, a top-secret Starfleet project enabling entire planets to be transformed into life-supporting worlds, pioneered by the mother (Bibi Besch) of Kirk’s estranged and now-adult son. While Mr. Spock mentors the young Vulcan Lt. Saavik (then-newcomer Kirstie Alley), Kirk must battle Khan to the bitter end, through a climactic starship chase and an unexpected crisis that will cost the life of Kirk’s closest friend. This was the kind of character-based Trek that fans were waiting for, boosted by spectacular special effects, a great villain (thanks to Montalban’s splendidly melodramatic performance), and a deft combination of humor, excitement, and wondrous imagination. Director Nicholas Meyer (who would play a substantial role in the success of future Trek features) handles the film as a combination of Moby Dick, Shakespearean tragedy, World War II submarine thriller, and dazzling science fiction, setting the successful tone for the Trek films that followed.

Everyone knows by now that Star Trek II is the best of the series. All of the elements that made the original TV run such a success are present here (and more): intelligent storytelling, great villans, great characterizations, and believable drama. William Shatner is at his best here as Kirk, facing his own mortality for the first time, confronts the outcomes of many of his life’s decisions (an ex-flame, his son, his decision to accept the promotion out of the Captain’s chair, and the return of a deadly adversary from the past).

The special effects are brilliant for the time, and the sets are above average. James Horner’s score adds to the nautical feel of the film. There is a darker and more violent tone to the film (I’m quite sure if this film had been made a few years later it would have EASILY been a PG-13) which may put off some viewers, but it is appropriate, and adds to the suspense of the story. Overall, this is the one Trek movie with the most repeat viewing value. My only complaint: I wish I could experience the excitement and suspense again for the first time!
Movie Content: 9.5/10

You didn’t think Mr. Spock was really dead, did you? When Spock’s casket landed on the surface of the Genesis planet at the end of Star Trek II, we had already been told that Genesis had the power to bring “life from lifelessness.” So it’s no surprise that this energetic but somewhat hokey sequel gives Spock a new lease on life, beginning with his rebirth and rapid growth as the Genesis planet literally shakes itself apart in a series of tumultuous geological spasms. As Kirk is getting to know his estranged son (Merritt Butrick), he must also do battle with the fiendish Klingon Kruge (Christopher Lloyd), who is determined to seize the power of Genesis from the Federation. Meanwhile, the regenerated Spock returns to his home planet, and Star Trek III gains considerable interest by exploring the ceremonial (and, of course, highly logical) traditions of Vulcan society. The movie’s a minor disappointment compared to Star Trek II, but it’s a–well, logical–sequel that successfully restores Spock (and first-time film director Leonard Nimoy) to the phenomenal Trek franchise…as if he were ever really gone. With Kirk’s willful destruction of the U.S.S. Enterprise and Robin Curtis replacing the departing Kirstie Alley as Vulcan Lt. Saavik, this was clearly a transitional film in the series, clearing the way for the highly popular Star Trek IV.

In this movie, Kirk loses probably the only things that rival his bond with Spock…his son and his ship. It’s wrenching to see unfold. Yet, as McCoy says in the movie Kirk always seems to “turn death into a fighting chance to live” and that is definitely shown here. The movie has some of the best visuals of any Trek movie. The characters of Chekov, Uhura, Sulu, and Scottie are still a powerful force in the movie though their screen time is not as great. On a personal note, the scene of the Enterprise self-destruct had a tremendous effect on me when I saw the movie in a packed theatre in 1984. Any Trek guru who says they didn’t have a lump in their throat when the blackened hulk of the Enterprise, the symbol for (at that time) nearly 20 years of imagination and wonder, slowly arcing into the Genesis atmosphere in a blaze of glory must have been sleeping or dead. I remember complete and utter silence in the theatre. It moved people…big time.

This film shows vividly the sacrifices that one could have to make for the friendship of one person. Kirk for all intents and purposes lost everything dear to him to try and save the one man he felt closer to than anything else in the universe. It’s almost Biblical in a sense…a simple question with tremedously complex answer: Would you be willing to lose everything for someone you cared about?
Movie Content: 9/10

Widely considered the best movie in the “classic Trek” series of feature films, Star Trek IV returns to one of the favorite themes of the original TV series–time travel–to bring Kirk, Spock, McCoy, Scotty, Sulu, Uhura, and Chekov from the 23rd century to present-day San Francisco. In their own time, the Starfleet heroes encounter an alien probe emitting a mysterious message–a message delivered in the song of the now-extinct Earth species of humpback whales. Failure to respond to the probe will result in Earth’s destruction, so Kirk and company time-travel to 20th-century Earth–in their captured Klingon starship–to transport a humpback whale to the future in an effort to peacefully communicate with the alien probe. The plot sounds somewhat absurd in description, but as executed by returning director Leonard Nimoy, this turned out to be a crowd-pleasing adventure, filled with humor and lively interaction among the favorite Star Trek characters. Catherine Hicks (from TV’s 7th Heaven) plays the 20th-century whale expert who is finally convinced of Kirk’s and Spock’s benevolent intentions. With ample comedy taken from the clash of future heroes with 20th-century urban realities, Star Trek IV was a box-office smash, satisfying mainstream audiences and hardcore Trek fans alike.

“Star Trek IV The Voyage Home” (1986) opens with joyous, celebratory theme music by veteran composer Leonard Rosenman which sets the tone for the entire film. In the words of director Leonard Nimoy, Trek IV is “a caper”, an old-fashioned fish-out-of-water scenario in which the crew of the ‘Enterprise’ travel backwards in time to 1986 to capture a pair of humpbacked whales (extinct in their own era), the only creatures capable of answering the signal from a monstrous, towering probe which is orbiting 23rd century Earth and causing havoc on a worldwide scale. The ecological message may simply be a by-product of the clever script, but it underlines the narrative at every turn, making serious what might otherwise have been little more than a lightweight, throwaway entry in the long-running franchise.

No matter, despite the incredibly weak plot, this movie is actually fun as we see Kirk and crew interact with people in the present. I guess my biggest disappointment was, normally, you don’t watch a Star Trek movies for the laughs. If you go into this movie understanding that cool special effects, new aliens, and exotic space scences are almost entirely missing from the movie; you probably will be in a better frame of mind to enjoy it.
Movie Content: 8.5/10 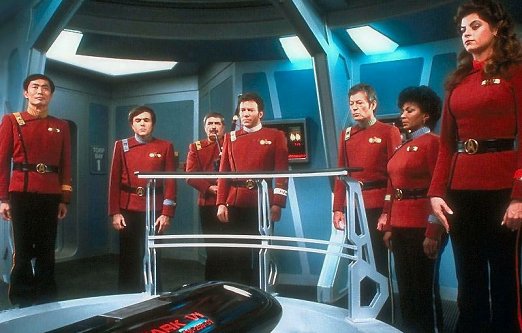 The print is presented in 1080p/AVC MPEG-4 with a 2.40:1 aspect ratio. ‘Star Trek II’ has the best image quality of the three films, with both ‘Star Trek III’ and ‘IV’ deadlocked on their quality. All three transfers have their flaws, but these films have never looked better and for fans of ‘Star Trek’ upgrading would be a no brainer. All three films carry a very soft and dull looking color palette. That is the nature of these prints to look soft based off their source material.

‘The Wrath of Khan’ was the only title in this set to receive a complete restoration. The image transfer looks great and I think that the colors stick out much better, yet still maintain a soft look. Black levels carry a nice depth to them. Details are sharp and clear throughout the entire film. There is grain present throughout the entire print, but nothing that becomes a distraction. I really liked how this transfer came out looking and surprised.

Both ‘The Search for Spock’ and ‘The Voyage Home’ are not bad prints by any means, except they are a notch below ‘The Wrath of Khan’. The color palette with both of these films is much more saturated carrying a warmer tone. I was disappointed in the quality of the fleshtones as they didn’t appear as clear and defined. ‘The Voyage Home’ does fall even a notch below ‘The Search for Spock’ where the fleshtones do not look as natural as the other two films. This has to do with the inclusion of good old DNR. The problem here is that you get that wax look on faces which I despise. Other than that, the print does hold up rather well in high definition.
Star Trek II: Print Quality: 9/10
Star Trek III: Print Quality: 8/10
Star Trek IV: Print Quality: 7.5/10

The audio is presented in Dolby TrueHD 7.1 mix. I found all three audio mixes to be more front heavy with the occasional usage of the rears. ‘The Search for Spock’ tends to use more of the rears than the other two films. Dialogue in all three films is well balanced sounding clear through the center channel. With the audio being so ever light in ‘Star Trek II’ it makes one wonder when we will see another set coming from Paramount. Like the video not being fully restored on the third and fourth films, I feel like the audio has taken a similar step behind. With the second and fourth film, I never felt like I was immersed which is a real shame. Granted ‘The Voyage Home’ is more of a dialogue driven film, I expected a bit more.
Star Trek II: Audio Quality: 7.5/10
Star Trek III: Audio Quality: 8/10
Star Trek IV: Audio Quality: 7.5/10 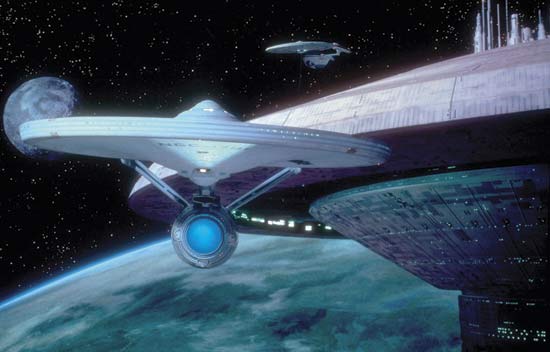 Special features for this set are not on the light side by any means. There is a nice balance between standard and high definition features here that will make fans very excited. All special features from the previous 2-disc DVD edition sets have found their way to the Blu-ray versions making these the ultimate editions.

‘Star Trek’ has finally arrived on Blu-ray and Paramount has offered the best films in the series. They are none other than the trilogy of ‘Star Trek II, II, and IV’. All three films have some flaws with their prints, but are a nice improvement over DVD making the upgrade worthwhile. If you are a Star Trek fan, I highly recommend picking up this set on Blu-ray.
Overall Rating: 9/10