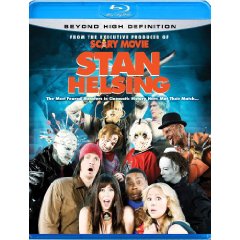 In the vein of spoof cinema like Austin Powers and the Scary Movie franchise, Stan Helsing lampoons contemporary film audiences’ never-ending fascination with what makes our blood curdle. In the story, hapless video store clerk Stan Helsing (Steve Howey) and his friends must make a routine video delivery on Halloween night before going to a Halloween party. But when a chain of seemingly random mishaps strand Stan and the gang in Stormy Night Estates, Stan learns of his true destiny as a descendant of the legendary monster-hunter Van Helsing. With his motley band in tow – including his best friend Teddy (“Saturday Night Live” star Kenan Thompson), he will battle evil in the form of parodies of movie monster icons “Freddy,” “Jason,” “Leatherface,” “Pinhead,” “Michael Myers,” and “Chucky”! The ultimate confrontation between good and evil will require immeasurable courage, grim determination – and a flair for karaoke?!?

The only things going for this self-proclaimed horror film parody are decent production values and attractive actresses. The movie itself, which is not really a parody of anything but just a limp comedy, is dumb and often dull. The attempts at humor are usually mean-spirited, too, and usually made at the expense of the female characters (who the producers apparently want us to look at but not respect).

The story, such as it is, involves four friends on their way to a Halloween party. As a result of various detours, none of which has any particular purpose except to serve as fodder for jokes, the characters never make it to the party but instead go through numerous allusions to horror movies, some obvious (as in the character “Freddy,” a very slight parody of Freddy from A Nightmare on Elm Street) and some not so obvious. (In case you’re wondering, the six horror icons are Pinhead, Chucky, Jason, Freddy Kreuger, Leatherface, and Michael Myers.)

I think that the spoofing of Freddy, Jason, Leatherface, Chucky, Mike Myers, and Pinhead could have appealed to horror fans – but sadly that happens almost never and mostly toward the end of the movie. I would say that fans of Scary Movie and other spoofs would get some entertainment from this movie, but I would recommend this as a renter over a purchase.
Movie Quality: 6/10

The print is presented in 1080p/VC-1 with a 2.35:1 aspect ratio. While not the strongest print on Blu-ray, I found the image quality to be above average. Colors were strong, but a bit dull at times. There is a thin amount of grain in this print that never becomes distracting. Blacks are rather solid and deep considering that the film primarily takes place in the evening with darker scenes. Fleshtones look very natural. I found the details to be good, but not overly great.
Video Quality: 8/10

The audio is presented in Linear PCM 5.1 mix. This is a more of a front heavy presentation. When the rears are in play, we get some nice effects yet I expected more from this recent release. Dialogue through the center channel is very clean and crisp. While I was not overly impressed with the dynamic sound, the overall mix is decent.
Audio Quality: 8/10

I am a huge horror fan so to see all the horror icons be spoofed in a film was rather fun. The problem I had here was how they were portrayed and written for a film like this which could have been so much better. Video and Audio were on the average side of things for Blu-ray. I highly recommend this film as more of a rental than a purchase to those that might be on the fence. As I stated earlier, this is a film that will appeal to those that did enjoy Scary Movie and this is one of the more fun spoof films to come along in the last few years.
Overall Rating: 7.5/10