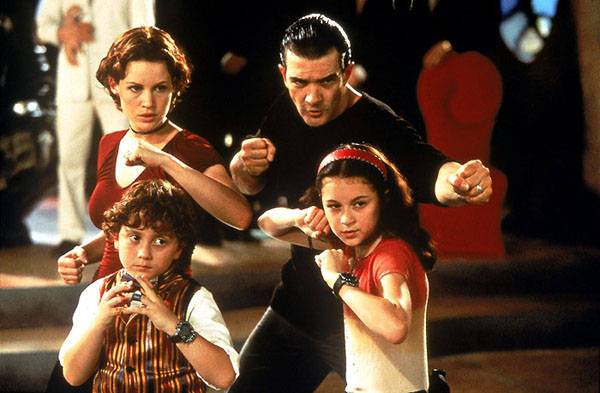 Bursting with an awesome array of ultracool, high-tech gadgetry, SPY KIDS delivers enough thrilling entertainment to satisfy the entire family! Nine years ago, top international spies Gregorio and Ingrid Cortez (Antonio Banderas and Carla Gugino) traded the excitement of espionage for the adventure of parenthood! But when they’re called out on a secret mission, the Cortezes are separated from their family and kidnapped by the evil Fegan Floop. Fortunately, there are two people who possess the skills and know-how to reunite the family: Carmen and Juni Cortez, their kids! Your family will love every fun-filled second as Carmen and Juni bravely crisscross the globe in a thrilling quest to save their parents. All the while, they discover that keeping the family together is the most important mission in the world for kids and parents alike! 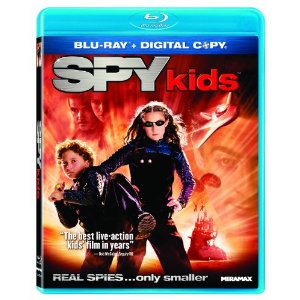 I’ve been a fan of Robert Rodriguez from the first moment I saw “El Mariachi,” and each successive film has just given me more reason to be a fan. With “Spy Kids,” Rodriguez changes gears, giving us his first film for kids, and the first film where he finally gives free rein to the sense of whimsy and fantasy hinted at in previous films.

While the film is nominally a kid’s film — a surreal children’s television show that makes the Teletubbies look mundane features prominently in the story — the humor and action is genuinely good for all ages. At one point, pre-teen heroine Carmen Cortez says that no one knows what her uncle does for a living, and he moves around a lot, and is generally mysterious. To which her uncle replies “doesn’t everyone have an uncle like that?” Well, yes, we do. 🙂

Beyond Antonio Banderas’ star power — and he does a very knowing self-parody of his own traditional parts in the movie — other strong performances by “name” actors pepper the film, including Teri Hatcher, Tony Shaloub, Robert Patrick, Cheech Marin and — one of those actors viewers know by sight, if not by name — Danny Trejo.

Overall, the action is kinetic, the message sweet, the kids believable and not in the least cloying (a true rarity in film), and overall, the film is a great treat for Rodriguez fans who have been watching his evolution towards more and more fantastic material (something that seemed obviously in his blood ever since the climax of “Desperado”).
Movie Quality: 9/10

The print is presented in 1080p/AVC MPEG-4 with a 1:85:1 aspect ratio. The print looks very good throughout without any apparent issues. Colors are vibrant and carry pop which brings out the fine details. The detailed scenes stand out very well. Blacks are deep. I found the print to be crystal clear with no artifacts or print damage. The darker look and feel of the film looks great with the appropriate lighting making this timepiece film standout.
Print Quality: 9.5/10

The audio is presented in a DTS-HD MA l0ssless 5.1 mix. I found this mix to be immersive when there is action on screen and there are many times throughout the film where there are plenty of fight scenes. I felt as if I were in the center of the action. The score was also well implemented into the mix to add to the atmosphere of the film. Dialogue is clean through the center channel.
Print Quality: 9.5/10

This movie is full of action, adventure and creative characters without being violent and scary. My kids loved this film and enjoyed it.
Overall Rating: 8/10