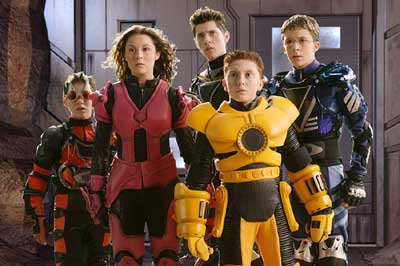 The Spy Kids are back again! This time, Carmen (Alexa Vega) and Juni (Daryl Sabara) are on a mission that takes them inside a living video game, where awe-inspiring graphics and creatures come dangerously to life. As they face more and more challenges through each level of the game, this brother-sister superhero duo must rely on their gadgets and each other to defeat the super-villain Toymaker (Sylvester Stallone) and save the world yet again. Don’t miss this super fun, totally exciting follow-up to Robert Rodriguez’s action franchise for kids of all ages! 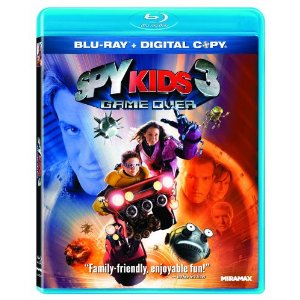 The Spy Kids movies have always been a little over the top, and this one is no different. I don’t mind over-the-top movies if they are done well; in fact, the over-the-topness is part of why they are so funny. From the start of this movie, with Juni playing a private eye in the style of the old Humphrey Bogart movies, I knew I was in good hands.

The acting is quite good for the most part (with the exception of some actors who have very small parts toward the end; nothing important or movie-breaking), and some of the concepts are worth the price of admission alone, as it were, such as Sylvester Stallone playing four different versions of himself–including a fascist martinet, a nerdy scientist, and an aging love hippie. Whoo hoo! And for that matter, some of the outtakes in the closing credits were pretty funny, too.

The basic story is that The Toymaker (Stallone) has created a virtual reality game that will take over the minds of all those who play it. Juni’s sister has already tried to get into the game to stop it, but has (mentally) vanished inside. Juni’s mission? Go inside the game, find his sister, and stop the game before it goes live.

Of course, Juni accepts the challenge (another thing I love about the Spy Kids movies–the family whose members truly love and care for each other), but meets many obstacles along the way, including young beta testers who are jealous of their territory and get in his way as much as possible. Lots of action, lots of fun.
Movie Quality: 9/10

The print is presented in 1080p/AVC MPEG-4 with a 1:85:1 aspect ratio. Spy Kids 3 is one of those films that you would like to break out for friends are over to show them the excellent picture quality of Blu-ray. From the colors to the details, your jaw will drop if you look for some of the superb details. Colors are vibrant providing an excellent looking picture. Flesh tones are natural and accurate looking. Blacks look inky. Details are where this film shines the most with the camera even panning away in many scenes. Not once did I feel like I was at a loss for details making this a very strong presentation.
Print Quality: 9.5/10

The audio is presented in a DTS-HD MA l0ssless 5.1 mix. This is a very atmospheric and immersive sounding film. The rears provide quite a few times where sound effects panned across the speakers. There are many scenes that are outside which also take advantage of the soundfield providing some dynamic sound. Dialogue is clean through the center sounding ever so crisp.
Print Quality: 9.5/10

I highly recommend this as a fun romp. My kids absolutely love this movie. Personally, I thought the CGI could have been better, but this obviously isn’t an adult movie. If you have young kids, they’ll likely enjoy it.
Overall Rating: 8/10