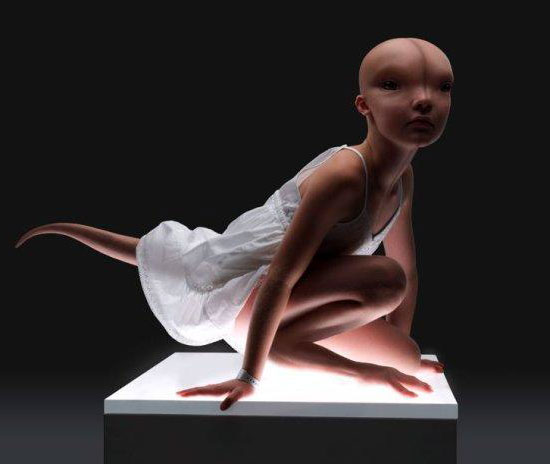 In the grand movie tradition of doomed scientists, Clive (Adrien Brody) and Elsa (Sarah Polley) won’t let the official quashing of their Frankensteinian experiment stand in the way of working on the scheme anyway. Sure, the ethics of swizzling together human genes with various lab potions is queasy, and the initial result of their rogue project is disconcertingly pitched somewhere between a human baby and a monster thing with a stinger in its tail. And yes, the beastie is growing fast. Like, really, really fast. But this is science, right? Surely the breakthrough in human evolution that would come with this experiment justifies a little corner cutting? Splice is going to answer these questions in a reliably familiar way, and in its early going it finds some fun in working hip variations on the mad-scientist genre–plus, in Brody and Polley, the film already distinguishes itself by reaching up to the top shelf for actors. It would be nice to report that director Vincenzo Natali (whose Cube was a very fun Twilight Zone-flavored teaser) is able to stitch these elements into something that keeps its momentum going; alas, despite the arrival of Delphine Chaneac as the mature (and unsettlingly sexy) mutant creature, the movie begins stepping into the sillier possibilities of its scenario. Splice would like to mess you around with some aggressively transgressive material toward the end, but this just leads us away from the most fruitful moral questions surrounding the creation of the semi-human being in the first place. That’s where the horror lies. 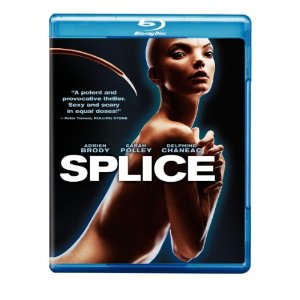 A lot of movies in the past have used this theme. Species tends to be the one a lot compare this movie to, and rightly so. The similarities are obvious, though the movie isn’t a rip off. This movie is an example of what Hollywood should be doing, not doing remakes or rehashes, but putting a spin on something familiar with a different story, and trying to make it stand out and be good on its own. So how well would it compare to others of the past? In my opinion, compared to Species, this movie is superior in every way.

That said, no it’s not perfect, hence the 3 star rating. For one thing I was never a fan of Sarah Polley, especially after seeing her replace Jodie Foster in Hannibal, and I’m not the only one who doesn’t care for her acting here either. On the other hand, she is supposed to play as a bitch character, but she did it better in that Nicholas Cage movie “Next” (which was also just an ok movie, at best). Another reason why it’s not so good is that you could pretty much tell what was going to happen in the movie before it happened. And then the final 20 or so minutes of the movie change the pacing/mood too much in the movie. The same thing could have been accomplished in a more closed out setting, without the running around, without the pointless deaths (save for one), while making it more effective than it was. But acting, pacing, and foreshadowing aside, this movie did stand out from the average, but it’s just a rental recommendation.

Now, as most of you know the story involves splicing genes, creating a creature that has human genes which grows into something that resembles a human along with other characteristics (see the cover), and how that creature deals with its rapidly changing life. Hence to say we all know that things aren’t going to turn out so well. The two scientists who worked on it in private soon began to lose their sense of ethics as quickly as the creature matures, with Polley’s character become abusive in a way similar to her past upbringing, and Brody’s character becoming seduced by the creature, which results in the sex scene that gets everyone so riled up about this movie (plus a rape that happens near the end when the creature turns male [foreshadowed by the 2 scientist’s earlier project] and has his [or its] way with Polley, who pretty much deserved it after all that’s happened). The thing is, audiences are supposed to be disturbed by the scene. That was the director’s goal! And yet people bitch and moan about it as if it was like an adult having sex with a minor on screen.
Movie Content: 6/10

The print is presented in 1080p/VC-1 with a 2.40:1 aspect ratio. Colors are vivid and rich throughout the entire presentation. Fleshtones are natural without any digital work. Blacks also have an inky look to them. Details are exceptional showcasing what a great print that Paramount has put together. There is some grain throughout the film, which isn’t distracting at all.
Video Quality: 9/10

The audio mix is presented in DTS HD 5.1 Master Audio lossless track. his is a very immersive soundtrack during the action sequences. This is a film where there are a lot of effects and thrilling sequences. Those looking for an audio mix that will take advantage of your equipment, this is the film for you. This is a very well done audio presentation that has dynamic range with the sound effects and a lot of panning from speaker to speaker. Dialogue is clean and crisp through the center channel.
Audio Quality: 9.5/10

“Splice” is good to watch once, but then not to see it again. I’d recommend it as a rental to anyone who’s interested in a “don’t mess with nature” or “creature” or “ethically challenging” movie for the night.
Overall Rating: 6/10