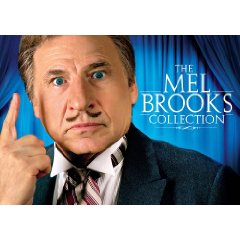 Mel Brooks’s 1987 parody of the Star Wars trilogy is a jumble of jokes rather than a comic feature, and, predictably, some of those jokes work better than others. The cast, including Brooks in two roles, more or less mimics the principal characters from George Lucas’s famous story line, and the director certainly gets a boost from new allies (SCTV graduates Rick Moranis and John Candy) as well as old ones (Dick Van Patten, Dom DeLuise). Watch this and wait for the sporadic inspiration–but don’t be surprised if you find yourself yearning for those years when Brooks was a more complete filmmaker (Young Frankenstein).

Spaceballs, by far, is considered one of those classic comedies. Anyone in my generation who grew up watching Star Wars will love this movie. Spaceballs primarily draws from Star Wars, but it has other sci-fi sequences in there as well, such as Aliens and Planet of the Apes. Granted the latter are simply given a scene to joke on, but they still had their moments.

I love Spaceballs, It is one of my all time favourite comedy’s. Mel Brooks puts together one of his finest achievements in this spoof on Star Wars, Star Trek, Space Odyssey, Buck Rogers, Planet of the Apes and the Wizard of Oz, just to name a few. And with a terrific cast of Bill Pullman as Lone Starr, the captain of Eagle 5 (which is a Winnebago with plane wings) and his pal Barf (No, not that. That’s his name) played by John Candy. He is a Mawg, that’s someone who is half man and half dog; he’s his own best friend. Anyway, they’re flying around in space and get a call from some space mobsters who tell them they owe Pizza The Hut a large amount of money. One million space bucks…. By tomorrow!!
Movie Content: 9/10 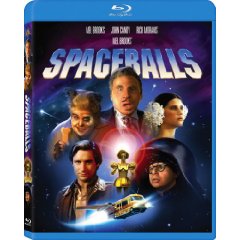 The print is presented in 1080p/AVC MPEG-4 with a 1.85:1 aspect ratio. To say that I am disappointed by the quality of this print is an understatement and I would be lying to our readers. I am surprised that this Blu-ray was released without any care just to make a quick buck. In some ways this Blu-ray is an improvement over the DVD release from a few years ago, but not the initial DVD release which was packed with this set. I found colors to be bland lacking any vibrancy that a catalogue title could offer. There is dirt and white specks throughout the print which should have been cleaned up. Details are lacking on any scenes where the camera is panned away, but when scenes are up close details look good. Blacks are rather strong throughout which was surprising. Hopefully one day MGM will revisit this filmon Blu-ray giving it the proper treatment.
Video Quality: 6.5/10

The audio is presented in DTS-HD MA lossless 5.1 mix. The soundfield does not take full advantage of moving to high def audio. The surrounds had some effects coming through, but the rears do not get the use that I would have expected. Dialogue is excellent through the center channel offering a nice and clean sound.
Audio Quality: 7/10

‘Spaceballs’ is an enjoyable comedy especially if you are a fan of the ‘Star Wars’ films. The video and audio do not fair well on Blu-ray as one would have hoped, especially if you are a fan of this film. The special features are ported from the collector’s edition DVD with an additional DVD flipper of the original DVD release. I do have a hard time recommending this Blu-ray considering that the video didn’t receive the upgrade that it should have considering the popularity of this title.
Overall Rating: 8/10