Posted in DVD Reviews by George Theofanopoulos on 12 December 2010 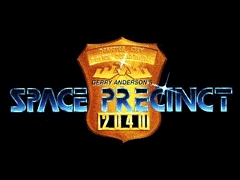 From sci-fi legend Gerry Anderson (Space 1999, Thunderbirds, UFO), this special-effects-filled series chronicles the adventures of two cops from Earth battling a rogue’s gallery of alien criminals in the year 2040. Transferred from the mean-streets of New York City to a teeming alien planet halfway across the galaxy, veteran police detective Patrick Brogan (Ted Shackelford, Dallas) and his rookie partner (Rob Youngblood, NYPD Blue, Sliders) struggle to adapt to their exotic new beat. Tangling with otherworldly outlaws in one deadly close encounter after another, the officers fight to bring intergalactic law and order to a mind-bending realm where the bad guy’s aren’t just bad… they aren’t even human! Episodes: Protect and Survive, Enforcer, Body and Soul, Double Duty, The Snake, Time to Kill, Deadline, Seek and Destroy, The Power, Illegal, Divided We Stand, Two against the Rock, Takeover, Predator and Prey, The Witness, Hate Street, Friends, Smelter Skelter, Flash, The Fire Within: Part 1, The Fire Within: Part 2, The Forever Beetle, Deathwatch: Part 1, Deathwatch: Part 2.

‘Space Precinct’ is a cop show IN SPACE, and the sci-fi elements are used better than I’ve ever seen in this genre. The aliens, in particular, actually look alien. There are some of the so-called “nose aliens” a la Star Trek, but the main races have their facial features done with puppetry, which makes them fabulously non-human looking while still being fully expressive. (Surprisingly, given the subject matter and the level of cheesiness, Space Precinct rarely descends into Men In Rubber Suits territory.)

And the alien location is used for maximum comedic effect: alien pizzas with horrible toppings delivered by parodic alien delivery guys on flying bikes, alien blind dates with unexpected biology, flying cop cars that look suspiciously like they were lifted from a 1980s US cop show, the bellowing Ethnic Stereotype boss who’s neither Irish nor black but instead a googly-eyed alien, godawful intentionlally absurd Future Slang, wacky alien reproductive processes and childrearing techniques…

The main human characters are cops who’ve transferred from New York to an alien planet known for its tough streets. For the two of them, the show cast genuine Americans with genuine American accents, which was a very good idea. For all of the other characters, including various other people who were supposed to be from New York, it cast locals: Brits and Europeans. Hilariously, this turned out to be an even better idea. The “Brooklyn” accent of one old flame who shows up must be heard to be believed! The foreign fascination with, cluelessness about, and humorous critique of American cop shows and American culture as seen on tv is evident throughout.

Though it only lasted a season, Space Precinct doesn’t feel unfinished to me. There is a surprising amount of character development for what’s primarily a silly, fluffy show. One of the main characters is married, and his wife and children are interesting and well-portrayed. Their Space!Barbecues in their Space!Back Yard are adorable. The other main character carries on an obnoxious but endearing flirtation with a coworker that progresses and is eventually resolved. The female characters are generally fairly three-dimensional despite a certain amount of the sexism that’s endemic to old cop shows and sci-fi.
Movie Content: 9/10

I highly recommend Space Precinct to anyone who likes very campy near-future sci-fi. The show reminds me of Futurama except that nearly everything in Space Precinct is played DEADLY SERIOUS. Which just makes it that much funnier.
Overall Rating: 8/10