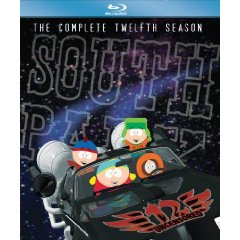 South Park is an American animated sitcom, notorious for its crude, surreal, and often dark humor, which satirizes a wide range of topics including religion, politics, violence, abuse, sexuality, and mental illness. Matt Stone and Trey Parker created the show and continue to do most of the writing, directing, and voice acting.

The narrative revolves around four boys — Stan Marsh, Kyle Broflovski, Eric Cartman, and Kenny McCormick — and their bizarre experiences in the titular mountain town. The show has won acclaim and a plethora of awards, including three Primetime Emmys for Outstanding Animated Program.

After 12 years, ‘South Park’ is still going strong as one of the edgiest shows on television. This show takes political satire to the next level. Even social commentary has been brought into the mix over each single season making each episode hilarious. Season 12 releases today on DVD and Blu-ray, and this has to be one of the better seasons of the show.

South Park continues to cause viewers to drop their jaws to the floor in its twelfth season on Comedy Central with out-of-control story lines, insanely funny characters, and downright crude scenes of violence/child endangerment/dirty talk.  For males 18-25, what the hell else could you want in a television series?  (Insert a lot of references to boobs here.)

Twelve seasons into a show might make people think the material is getting stale, as it might be on any other show.  But until Matt Stone and Trey Parker decide they want to stop pushing the boundaries for comedy, I don’t think there’s going to be much of a halt on the quality production of South Park episodes.
Movie Content: 4/5 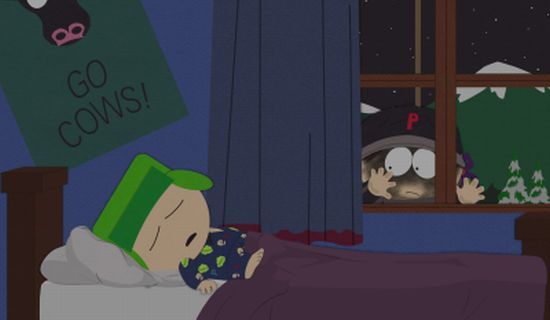 Britney’s New Look – Rather than mock the mess Britney Spears was, this episode mocks those of us who put her there and those trying to take her place.

Tonsil Trouble – Cartman ends up with aids, and he’s hiv positive that he wants to find a cure.

Canada Goes On Strike – I’m canadian and love that they used us to mock the writer’s strike of last year.

Eek, A Penis! – Mrs. Garrison comes full circle. Or is that Mr. Garrison?

Over Logging – Instead of commenting on natural resource over use like oil or forestry Matt and Trey decide to comment on our over dependency on the internet.

Super Fun Time – A pioneer village field trip turns into the plotline of several hit eighties movies when terrorists take over the fun park and Cartman and Butters skip out.

The China Probrem – Beijing Olympic’s get Cartman paranoid of the Chinese while Kyle and Stan deal with the disappointment of Steven Speilberg and George Lucas ‘raping’ Indiana Jones for profits.

The Breast Cancer Show Ever – Cartman becomes a cancer to Wendy, the only way to stop cancer is to fight it.

Pandemic – The boys get Craig involved in a scheme that goes wrong, meanwhile Randy goes ‘cloverfield’ with his new video camera when furry monsters begin attacking.

Pandemic 2 – The Startling- I’m so startled, and so is Randy as Craig and the boys finish saving the world again with more unrealistic twists than the latest Hollywood blockbuster’s.

About Last Night – Instead of mocking the presidential candidates like everyone else we see a twist on their stereotypes when election night turns into a heist movie for the O’Bama and McCain tickets. Meanwhile the boys parents get out of control celebrating the ‘change’.

Elementary School Musical – I hate High School Musical, and luckily for me so do Matt, Trey and the boys. Rather than dance and sing a boy wants to play basketball but his dramatic father won’t allow it.

The Ungroundable – Butters unwillingly joins the ‘Twilight’ crowd while the Gothic kids try to stop the ‘vamp’ craze at it’s source, the local Hot Topic store.

The print is presented in 1080i with a 1.85:1 aspect ratio. Colors are vibrant throughout the entire season. What is really neat is that you can really notice the textures they use for each character and it really looks like the characters were built using construction paper (since, although the show is now computer animated, the animation in the pilot episode was actually created using construction paper). The image is sharper than the previous DVD releases.
Print Quality: 4/5

The audio is presented in Dolby TrueHD 5.1 mix. Dialogue is centered through the center channel with occasional voices coming through the rears. I was very surprised to see that the score came through the entire soundfield. The reason for that is due to the series always being front heavy, which it still is, but there is more coming from the rears than I expected.
Audio Quality: 4/5

Audio Commentary for every episode by Trey Parker and Matt Stone.

Disc One
Making Boobage: Behind the Scenes of “Major Boobage” – This feature showcases Kenny and Randy Marsh’s scenes which pay homage to “Heavy Metal” from storyboards and commentary on those “major boobage” scenes.

Disc Two
Six Days to South Park: A Day-by-Day Making of South Park – This features six of the staff discussing how the episode “Super Fun Time” was created.

Disc Three
Behind the Scenes: “About Last Night” [HD] – 20-minute featurette featuring the producers commentary of the episode.

This series has been entertaining from the very first season. I have always sat back and enjoyed the off the wall comedy of ‘South Park’ for what it has to offer and never looked deeper into the meaning of episodes. The cool thing is that the twelfth season actually has a lot of surprises for longtime fans. You wouldn’t expect such a simple animated cartoon to look good in high definition, but it helps enhance the image. Fans of the show will enjoy this Blu-ray release.
Overall Rating: 4/5