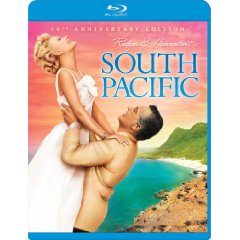 For its Blu-ray release, South Pacific underwent a complete photochemical restoration of its original 65mm negative, and underwent an 8k high definition scan of the brand new interpositive.  For the first time in high definition, you can enjoy Leon Shamroy’s widescreen photography of the Hawaiian locations and be dazzled by director Joshua Logan’s famous filtered sequences.  The original soundtrack will, for the first time ever, be presented in uncompressed, Lossless DTS audio.

The story is set on an island in the South Pacific during WW2. The Japanese are entrenched in a nearby island and are bombing American forces that go near, but life is sweet for the G.I.s at the naval base. Mitzi Gaynor, cast as a nurse, is beginning a romance with an older distinguished French planter played by Rossano Brazzi. John Kerr is a young lieutenant who comes to the island to convince the planter to risk his life to spy for the Americans. And Juanita hall is the older native woman who pushes her daughter, the lovely France Nuyen, at John Kerr. The music is excellent and the words of the songs really do move the story along.

The theme however, is more than a love story. It deals with racism and the tragedy of war too. And these themes are what held it all together for me. And I didn’t even care that, with the exception of Rossano Brazzi and Ray Walston, whose role as a sailor who always has a scheme and adds some really funny comic relief to this tale of love and war, the acting in general was passable. Everyone else gave rather decent performances, and Mitzi Gaynor might be pretty, but she can’t quite show a wide range of emotion. Also, the songs were all dubbed and obviously so. But that was the way Hollywood did things in those days. It’s also interesting to note what the standard for beauty was in 1958. With the exception of the dancers, it was youth alone and not workouts in the gym that shaped the actors’ bodies. Narrow waists were in style for the women, but hips were allowed to flare naturally.
Movie Content: 8/10

The print is presented in 1080p/AVC MPEG-4 with a 2.20:1 aspect ratio. The image looks absolutely pristine and stunning for its age. I have been amazed at how wonderful films from the 50’s and 60’s have turned out on the Blu-ray format. At times some of the older films have put more recent films to shame in terms of picture quality. This has to be one of the most vivid reproductions of a classic film yet. The color blue and red stick out in this film. Also add a yellowish tint throughout the film and you have a great looking film. This restoration does a good job bringing out the finer details. Fleshtones are natural and accurate. If FOX can reproduce and make a film of this age look this wonderful they get my vote as one of the best studios releasing older catalog titles on Blu-ray.
Print Quality: 10/10

The audio is presented in DTS-HD MA lossless 5.1 mix. While the film rarely uses the rears speakers and is more of a front heavy experience, I was rather impressed as to how well this film sounded. Any scenes involving action, do sound good in the atmosphere albeit the lack of sound from the rears. Dialogue is clean and center with no balance issues. The advantage of this DTS-HD lossless mix is that it allows this film to get some depth from an audio standpoint that was otherwise lacking on previous formats.
Audio Quality: 8.5/10

It is a nice effort by Fox to offer this 50th Anniversary edition on Blu-ray which will make fans very happy. I am not a huge fan of musicals, but I was very impressed with how this films looks on Blu-ray. FOX does yet another stellar job bringing one of their older catalog titles to the high definition era.
Overall Rating: 9/10