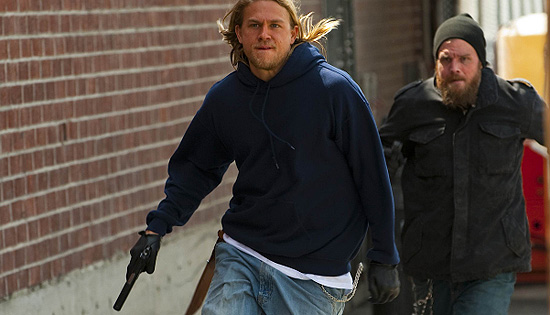 The sins of the father come crashing down on the son in the stunning, suspense-filled Season Three of Sons of Anarchy! Chaos and confusion reign after Jax’s infant son has been kidnapped and Gemma (Golden Globe winner Katey Sagal) has been framed for murder. When Abel’s trail leads SAMCRO to Belfast, Ireland, secrets are revealed and the bonds of brotherhood are shattered. Jax is left reeling with more questions than answers as he struggles with the legacy of his father, the future of the club, and the fate of his family. 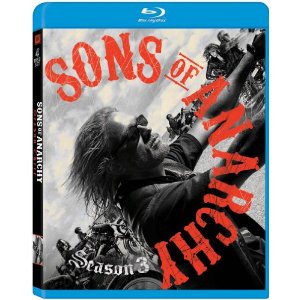 This is an awesome show. It has action, drama, emotional connection and the elements that made ‘The Shield’ such a great show. For the people that think this show is about violence and crime only, obviously they have not watched the seasons consecutively. Yes there is violence (a lot of it) and profanity, sex, drugs basically all of the stuff that is in the real world now. But mainly its about a guy who loves the “family” feeling and the closeness of friends (his club) but is looking for a lifestyle away from the drugs and violence. Protecting his family and his club is all that Jax cares about.

After watching the addictive series from the first, I loved the entire Shakespeare in leather premise, admired the single-minded tough guys and their sexy, adoring women, all centered upon the Teller Morrow clan. I was most interested in the Jemma character, played to perfection by Katey Sagel. While sharing her family views and exacting jealousy for her ‘viejo’, her anger was always too white-hot for me

I won’t spoil it for anyone who hasn’t watched but I’ll suffice to say the Sons get theirs. You will discover why Jemma has such an aversion to God and religion. You will understand her utter contempt for her first husband, John Teller, Jax’s father. You will enjoy the quick trip to the gritty side of Ireland and hang your head at the greasy grace of Catholicism. You will see Agent Stahl over-play her hand and Jax snicker as the Sons meticulously tie up loose ends.

You will love season 3 but I strongly suggest that you watch season 1 & 2 first.
Movie Quality: 10/10

The print is presented in 1080p/AVC MPEG-4 with a 1:78:1 aspect ratio. I thought the how looked fantastic on television, but on Blu-ray they have done an excellent job providing a much cleaner and sharper looking image. Colors are vivid throughout the presentation. Black levels aren’t as deep. Flesh tones are accurate and natural looking. The print is pristine from any issues.
Print Quality: 9.5/10

The audio is presented in a DTS-HD MA l0ssless 5.1 mix. For a film of this nature, the audio is very engaging in the soundfield. The rears actually get a nice amount of usage with the soundtrack. Dialogue through the center channel is very clean and crisp. The mix is well balanced between the dialogue and soundfield. The action takes center stage with guns blazing, the sound of the motorcycles, and explosions as an example of panning effects.
Print Quality: 9.5/10

‘Sons of Anarchy Season 3’ is one of the more enjoyable television shows that continues where season two left off and doesn’t disappoint one bit. The picture, audio, and special features are very well done making this a worthwhile package on Blu-ray.
Overall Rating: 9/10