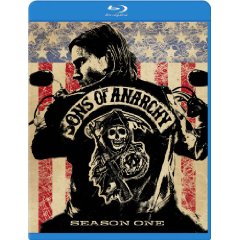 The writer of the Shield and the producer of the Sopranos bring you the most ruthless adrenaline-packed new drama of 2009. With over 40 minutes of unaired scenes, the DVD takes you even deeper in the unexplored world of this outlaw Californian Motorcycle Club as its members struggle to balance family life and weapon-trafficking business.

The premise is sort of Hamlet-meets-the-Sopranos: youthful biker and new dad Jax Teller (Charlie Hunnam) finds himself trying to balance work with personal life as the Vice President of the Sons of Anarchy Motorcylcle Club Redwood Original (aka SAMCRO), a gun-running biker gang co-founded by his late father and now run by his stepfather Clay Morrow (the ever-swaggering Ron Perlman), who’s married to Clay’s widowed mother Gemma (Katey Sagal, in pretty much the biggest departure possible from her Married With Children days). From the somewhat hippie-ish beginnings envisioned by Jax’s father, SAMCRO has evolved into a criminal powerhouse, especially in their central California base of Charming, where they’re practically a small-town Mafia. These guys may not be as bad as the Hell’s Angels, but the show makes it clear that they’re far from harmless nonconformists, as we see them running guns, committing murders and (in one particularly stunning scene) burning off the tattoo of a perfidious former member. Single-episode plots focusing on the gang’s efforts to turn a profit and stay out of trouble are expertly mixed with longer arcs dealing with the constant conflicts of gangland life and the mounting tensions within the club.

Outstanding variety of characters, excellent casting all around, great story and subplots that add even more drama to the dramatic, and just some laugh out loud or downright crazy stuff that happens in each episode. I was blown away with Jax, as a character (and the actor who played him) because of the depth and conflicted duality he seemed to contain just below the surface that keep me riveted to the screen. And I was floored by Gemma, she was just so awesome, like a mother bear protecting her cubs. Jax is the star of the show – Charlie Hannum is an excellent, irreplaceable choice to play the part. He is going through a crisis of faith, after his son (Abel) is born prematurely due to his almost-ex-wife’s drug addition.

The antagonists are Clay and Gemma. Clay was one of the First Nine that started the club – Jax’ father’s best friend. When Jax’ father died, Clay and Gemma got married and Clay raised Jax with Gemma. As you watch the show, you realize that Gemma (superbly played by the most incredible Katey Sagal) is pulling all the strings, and running her son’s “kingdom” according to her own internal ethical agenda, until Jax can take over.
Movie Quality: 10/10

The print is presented in 1080p/AVC MPEG-4 with a 1.78:1 aspect ratio. The print looks very good for a television show presented in high definition. Colors are vibrant and strong as this show benefits a lot from being set in many different outside environments. Blacks are deep helping to bring out the best details of the print. Fleshtones are natural looking realistic which again adds to the excellent details. The show maintains that wonderful gritty look as seen on broadcast television. There are five episodes per disc which I felt was going to cause a problem with the print of each episode, but I was wrong in that thinking.
Video Quality: 9.5/10

The audio is presented in DTS-HD MA lossless 5.1 mix. ‘Sons of Anarchy’ is a nice mix of action and dialogue which take great advantage of the high res audio for this Blu-ray release. Audio is much more immersive with the DTS-HD mix over the broadcast viewing with the surrounds getting more usage anytime there are effects. You are able to hear all kinds of bullets and gun shots during action scenes whiz dynamically from speaker to speaker in the soundfield. The roar from the motorcycles is also as if you were sitting on a bike cruising around town. Dialogue is well placed and balanced through the center channel sounding very clean.
Audio Quality: 9.5/10

‘Sons of Anarchy’ has to be one of my most favorite television shows on television. This is The Shield meets The Sopranos as we have the writer of The Shield and producer of Sopranos involved with this series. You really get that kind of feel from this series. On Blu-ray the video and audio are excellent providing an immersive experience. If you are a fan of the show run out and pick up this set and if you are on the fence, you will not be disappointed.
Overall Rating: 9.5/10