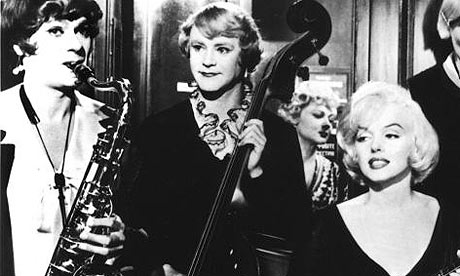 Maybe “nobody’s perfect,” as one character in this masterpiece suggests. But some movies are perfect, and Some Like It Hot is one of them. In Chicago, during the Prohibition era, two skirt-chasing musicians, Joe and Jerry (Tony Curtis and Jack Lemmon), inadvertently witness the St. Valentine’s Day Massacre. In order to escape the wrath of gangland chief Spats Colombo (George Raft), the boys, in drag, join an all-woman band headed for Florida. They vie for the attention of the lead singer, Sugar Kane (Marilyn Monroe), a much-disappointed songbird who warbles “I’m Through with Love” but remains vulnerable to yet another unreliable saxophone player. (When Curtis courts her without his dress, he adopts the voice of Cary Grant–a spot-on impersonation.) The script by director Billy Wilder and I.A.L. Diamond is beautifully measured; everything works, like a flawless clock. Aspiring screenwriters would be well advised to throw away the how-to books and simply study this film. The bulk of the slapstick is handled by an unhinged Lemmon and the razor-sharp Joe E. Brown, who plays a horny retiree smitten by Jerry’s feminine charms. For all the gags, the film is also wonderfully romantic, as Wilder indulges in just the right amounts of moonlight and the lilting melody of “Park Avenue Fantasy.” Some Like It Hot is so delightfully fizzy, it’s hard to believe the shooting of the film was a headache, with an unhappy Monroe on her worst behavior. The results, however, are sublime. 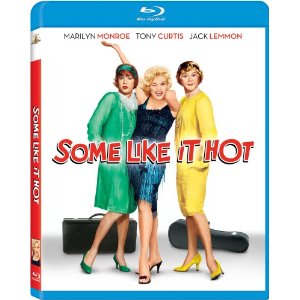 Billy Wilder’s most popular comedy finally receives the deluxe treatment it deserves. MGM previously released this classic comedy in a nonanamorphic widescreen version a couple of years back. While that edition looked pretty decent this anamorphic transfer puts any previous editions (including my much favored laserdisc edition) to shame. Wilder’s comedy operates as a spoof of gangster films and a comedy about gender roles. Jerry (the late Jack Lemmon) and Joe (Tony Curtis) are two musicians on the lam when they witness the St. Valentine’s Day Massacre. With Spats Columobo (George Raft) and his men looking for the duo they go undercover as musicians cross dressing and joining an all female band headed for a gig in Florida. Becoming a woman allows Joe/Josephine to spent time with Sugar (Marilyn Monroe) the latest woman that catches Joe’s fancy. Jerry/Daphne on the other hand finds himself romanced by a rich man (Joe E. Brown) who won’t take the hint as Jerry tries to blow off his advances.

And you thought the 50’s were tame. One of Wilder’s richest 50’s comedies “Some Like It Hot” continues to be very funny inverting our expectations constantly and playing with the roles that Jerry and Joe take on with their new identities. Joe’s eyes open the most as before he was a pretty ruthless womanizer. Becoming a woman puts him in the crosshairs of every male insight and he’s on the receiving end of all the smirks, comments and passes that he would have used with Sugar before his change. Wilder mixes social commentary so deftly with comedy (like Hitchcock’s work with suspense and social commentary) that at his best–and he’s at his best here–it reminds us how entertaining a movie can be without being heavy handed. It’s also filled with some marvelous in jokes (for example Colombo played by George Raft observes a thug flipping a coin and comments, “Where did you pick up that cheap trick?” Raft of course did the exact thing in one of his signature roles in “Scarface” from 1932).
Movie Quality: 9/10

The print is presented in 1080p/AVC MPEG-4 with a 1:66:1 aspect ratio. A great movie looks even better in this sharp looking transfer. The black and white imagery of the film looks gorgeous. Originally Marilyn Monroe lobbied to have the film shot in color which Billy Wilder felt wouldn’t work for this comedy (he persuaded her to agree to shoot in black and white when he showed her make up tests for Jack Lemmon and Tony Curtis in color where their make up as women made them look slightly green) while the film certainly would have looked great in color the sumptuous cinematography by Charles Lang looks extremely good in this wonderful looking transfer. Detail is quite good and blacks are solid with a nice array of different textures evident in the transfer.
Print Quality: 9/10

The audio is presented in a DTS-HD MA l0ssless 5.1 mix. This original mono mix has been expanded to a DTS-HD MA 5.1 mix. While the mix has been expanded this film still feels true to its original mono mix which is not a bad thing at all. With films like this one, it is important that they stay to their original audio mix as much as possible. I have seen too many films try to get expanded to a 5.1 mix and then everything falls apart. The soundtrack sounds very good with this new mix filling the soundfield.
Print Quality: 9/10

This was a delightful view into the highs and lows of courtship, love, jealousy, and hate and what havoc can be wrought by schemes devised to satisfy emotional turmoil. With the lovely backdrop of Italy, all is well that ends well for the characters. Michael Keaton as comic relief is brilliant.
Overall Rating: 8.5/10