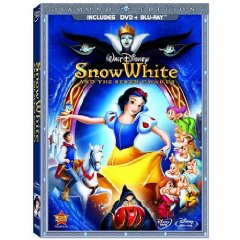 One of the brightest nuggets from Disney’s golden age, this 1937 film is almost dizzying in its meticulous construction of an enchanted world, with scores of major and minor characters (including fauna and fowl), each with a distinct identity. When you watch Snow White’s intricate, graceful movements of fingers, arms, and head all in one shot, it is not the technical brilliance of Disney’s artists that leaps out at you, but the very spirit of her engaging, girl-woman character. When the wicked queen’s poisoned apple turns from killer green to rose red, the effect of knowing something so beautiful can be so terrible is absolutely elemental, so pure it forces one to surrender to the horror of it. Based on the Grimm fairy tale, Snow White is probably the best family film ever to deal, in mythic terms, with the psychological foundation for growing up. It’s a crowning achievement and should not be missed.

Snow White’s story is timeless, and although it may be taken from fairytales, Disney’s adaptation and interwoven music gave it new life, ensuring it would entertain generation after generation. It started out as “Disney’s Folley,” but it became something more important than even Disney himself could imagine: a timeless piece of human culture, and a testament to the power of human creativity.

It’s almost impossible to critique the actual movie itself, without taking all of that into account. It’s not the most complex film; it doesn’t have the greatest character development or plot. For those who haven’t seen it – hopefully you’re just all young and have a legit excuse – Snow White is about… Well, Snow White.

“Snow White and the Seven Dwarfs” possibly began the “good versus evil” trend in Disney’s movies. It is about a beautiful, good-hearted princess that has the misfortune of being hated by her stepmother, because her mirror informs her that Snow White is the fairest and most beautiful of them all. Of course, her stepmother can not stand competition and rapidly orders a servant to go to the forest with Snow White, and kill her there. Luckily, the servant is incapable of following these horrible orders, and sets Snow White free.
Movie Quality: 10/10

The print is presented in 1080p/AVC MPEG-4 with a 1.33:1 aspect ratio. The colors in the film are just eye popping from the opening scene that really pulls you into the film like no other animation. Just look at the colors of the clothing, artwork, the caldren, and even the plant life all around. I was awestruck at how good this film looks and this almost brings a near 3D look to the film that was never there. Just the details alone really are captivating as I mentioned earlier. Everything now looks even more lifelike than they ever did. This is a feet considering in previous version of the DVD, I found the presentation to looked rather washout a bit. The image is very clean and crisp, albeit a few minor issues at the beginning of the film. There were times where I just sat there in awe viewing the film.
Video Quality: 9/10

The audio is presented in a DTS-HD Master Audio 7.1 mix which does not disappoint either. The score used in this film has been brought to life with the new high definition resolution audio. I couldn’t believe the sounds that were coming from all over the room with my setup and the rears were getting their workout too during many of the scenes. Dialogue is handled very well through the center channel with very clean and clear presentation. If Disney engineers can do this with a film that is over 70 years old.
Audio Quality: 9/10

Besides the whole packaging issues that I have with this release, I found the special features to be excellent for this set. Disney offers another excellent set of features for one of their classic films and fans will not be disappointed with what is offered here considering that there are a lot of features in high definition.

Disney has done justice to their film that started it all and ‘Snow White and the Seven Dwarfs’ is an absolute must have for anyone’s home library. Disney has proven once again that they know exactly what the home viewer is looking for and it will be exciting to see what is in store for the future with their new Diamond Editions. This is highly recommended for fans of ‘Snow White’ and Disney does justice to yet another classic film in high definition.
Overall Rating: 9.5/10