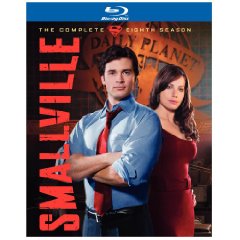 Michael Rosenbaum was a solid Lex Luther but I don’t blame him for not returning for this season. I mean in his last years all they could think of doing with him was put him with Lana and have him look for a secret group that worshiped Clark. It’s too bad that Kristin Kreuk had to make a 4 episode appearance though. I would have much rather have seen Rosenbaum back. The writers have always thought of bad new ways to overuse her character. A 4 episode appearance was a lot more painful than I was hoping for. What was done with her almost made me want to stop watching the show. I’ll just say they totally overdid it this time. If you think she has been used bad in the past, no way does it compare to how she was used in just 4 episodes!

While when Lana was gone Chloe managed to get on my nerves this season instead. Sam Witwer plays David Bloome who right away has a huge crush on Chloe. It’s silly how she is drawn to him too and how she takes his part over Jimmy and Clark who she has known a lot longer. Oh, plus David Bloome the pretty boy just happens to be Doomsday. That’s right, the Doomsday in the comics that killed Superman. Only in Smallville would Doomsday be a pretty boy that has a crush on Chloe lol.

So what was done with Lana was beyond horrible and the Chloe and Doomsday stuff was a bit annoying too. Yet, the season did have plenty of good moments as well. Erica Durance is no doubt 100% Lois Lane this season. She has really become the character and the way Clark and Lois flirt and tease each other was just a delight to watch. Which made it a shame that she was totally pushed to the side and barely even mentioned in 3 of the episodes that Lana was in. Her scenes with Clark beats Clark all depressed saying “oh Lana this, oh Lana that” any day. Lois and Clark are fun together, Lana and Clark haven’t been fun together since god knows when. They are just depressing and boring and I sure the hell hope she’s not back in season 9, even if it is a small appearance.

Lana even managed to almost ruin a near solid episode where Legion, a team of heroes come from the future to help Clark. Brainiac has taken over Chloe and they want to kill her and Clark doesn’t. It was an awesome episode, that was until the girl in Legion tells Lana that she has a great destiny and Lana has a huge smile on her face like she knows she’s all that. It was just painful to watch. Supergirl took a hike just so Lana could be told she has a great destiny. There were a few head scratchers this season that brought it down a notch for me.
Movie Quality: 8.5/10

The print is presented in 1080p/VC-1 with a 1.78:1 aspect ratio. I found this season of ‘Smallville’ to match the quality of the previous seventh season on Blu-ray. There is a rich color palette that is used for this show that pops off the screen. Also the usage of blue and yellow tints are apparent throughout several episodes of each season. Black levels are strong. I did have a few issues with details as they were off a bit in some episodes mainly with the facial tones. The print was clean throughout with hints of noise in some episodes. Albeit a few of these issues, if you were happy with season seven on Blu-ray this will not disappoint.
Video Quality: 8.5/10

The audio is presented in Dolby Digital 5.1 mix. I am surprised that Warner would go with a DD5.1 mix here and not a lossless which doesn’t help the format.Dialogue was front and center with no apparent issues sounding crisp. The soundfield was rather active anytime there were action sequences or effects. I do think that this could have sounded even better with lossless audio mix.
Audio Quality: 8/10

Season Eight started off very strong and hit a few bumps along the road halfway through, but things turned around a bit towards the end. This is not a bad season by any means and probably one of the stronger ones the last few years. On Blu-ray, if you owned the previous seasons in high definition than you will not be disappointed. I highly recommend this to fans of the show.
Overall Rating: 8.5/10