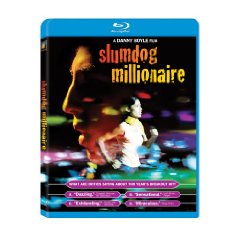 Danny Boyle (Sunshine) directed this wildly energetic, Dickensian drama about the desultory life and times of an Indian boy whose bleak, formative experiences lead to an appearance on his country’s version of “Who Wants to Be a Millionaire?” Jamal (played as a young man by Dev Patel) and his brother are orphaned as children, raising themselves in various slums and crime-ridden neighorhoods and falling in, for a while, with a monstrous gang exploiting children as beggars and prostitutes. Driven by his love for Latika (Freida Pinto), Jamal, while a teen, later goes on a journey to rescue her from the gang’s clutches, only to lose her again to another oppressive fate as the lover of a notorious gangster.

Running parallel with this dark yet irresistible adventure, told in flashback vignettes, is the almost inexplicable sight of Jamal winning every challenge on “Who Wants to Be a Millionaire?,” a strong showing that leads to a vicious police interrogation. As Jamal explains how he knows the answer to every question on the show as the result of harsh events in his knockabout life, the chaos of his existence gains shape, perspective and soulfulness. The film’s violence is offset by a mesmerizing exotica shot and edited with a great whoosh of vitality. Boyle successfully sells the story’s most unlikely elements with nods to literary and cinematic conventions that touch an audience’s heart more than its head.

‘Slumdog Millionaire’ took the film world by storm and won several Oscars, with major ones for best adapted screenplay, best director and the big one best picture. ‘Slumdog Millionaire’ is the little movie that I’m sure not many expected to become the blockbuster hit it was and of course winning all the Oscars it did. There’s a lot of hype for this film and the good news is that it will grab a lot of people’s attention. The problem is that this film could also upset or offend some due to the poor living conditions of the children and how they are depicted on screen.

‘Slumdog Millionaire’  is an excellent film for sure and I would rate the movie as one of my favorites of 2008.  I thought the movie was very good having to compete with other films in 2008 that could have easily taken the Oscar for Best film. A lot of people have compared ‘Slumdog Millionaire’ to ‘Rocky’ due to the underdog vibe both movies have and that’s where the strength of Slumdog comes from. Everybody loves an underdog story and I’m sure that in part is what helped Slumdog dominate the Oscars.
Movie Content: 9/10

The print is presented in 1080p/AVC MPEG-4 with a 2.35:1 aspect ratio. The print looks very good throughout without any apparent issues. Colors are vibrant and carry pop which brings out the fine details. The colors used in the film also help bring out the grittiness of the film without making the image look dirty. The detailed scenes stand out very well. Blacks are deep. I found the print to be crystal clear with no artifacts or print damage. Overall, this is a fairly impressive print to go along with a great story.
Print Quality: 9.5/10

The audio is presented in DTS-HD MA lossless 5.1 mix. This is an audio mix that is dialogue driven, but takes well advantage of the surrounds in the soundfield with effects and soundtrack. I was astonished at how beautifully the songs from the soundtrack came pouring into the soundfield. Not once did it feel bombastic or out of place with the dialogue providing a well balance between the two. The dialogue is clean and clear through the center channel with no apparent issues. I was very impressed considering this was my first viewing of the film on Blu-ray not having seen it in theaters. I call the audio mix demo worthy and is one of the reasons worth checking out this film.
Audio Quality: 10/10

‘Slumdog Millionaire’ is an excellent film that is worth viewing for those that have not yet been able to check out such an inspiring story. On Blu-ray the film sounds and looks excellent providing some demo worthy material for 2008’s Best Film of the Year. Don’t walk to get this film, run.
Overall Rating: 9/10