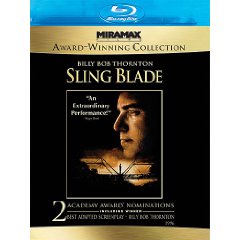 Billy Bob Thornton wrote, directed, and starred in this mesmerizing drama with haunting overtones of To Kill a Mockingbird. Thornton plays a mentally retarded man who has spent 20 years in a psychiatric hospital for killing his mother and her lover. Released into the community from which he came, he befriends and protects a lonely boy regularly harassed and abused by his mom’s boyfriend (a terrific performance by Dwight Yoakam). The story is ultimately about sacrifice, but Thornton certainly doesn’t get twinkly about it. Some of the best material concerns the hero’s no-big-deal efforts to integrate into a “normal” life: working, eating fast food, earning admiration for his handyman skills, and attaining a semblance of community among other damaged souls. John Ritter has a great part as a gay shopkeeper who tries to assuage his own loneliness by spilling his guts out to Thornton’s uncomprehending character.

As a Director, Thornton holds his camera in capricious long shots and expanded takes, allowing his characters to exist in an exaggerated time and space, thereby empowering his actors to explore the nuances of their shadowy lives and share freely of their expansive hearts. Yes all of these people have secrets- Thornton rarely saturates his frame with full light. Bands of shadow wash across every character. Everybody has flaws- potential for good and evil in equal measure- even the villainous Doyle Hargraves (deliciously played by country-western star Dwight Yokum), deserving of Book of Revelation retribution as any character in recent memory, has his moments of vulnerability. The tragic wide-eyed ten year old Frank (played without any cloying sentiment by Lucas Black) too is capable of sudden violence when defending his mother.

Thornton shows he trusts his actors. With his continual use of long unbroken takes, he doesn’t artificially create performances through imposed editing. These actors embrace the loud silences and large spaces and time and, as a result, appear to truly and organically erupt in moments of joy, compassion, humor and rage- all in the gentle lilting brogue of a brown water Arkansas drawl. The ensemble cast, made up of professionals (John Ritter in a heart-breakingly humane and admirable performance) and locals (several non-actors appear in effective support), alike never fail to hold the camera’s eye.

The film is violent, but tastefully so. The bloodiest moments are reserved for off camera-employing the audience’s imaginations to create far more vibrant images than any camera could provide- a lesson too many of Thornton’s contemporaries forgot. The most violent and jarring moments occur in Thornton’s elliptical dialogue. He understands the power of word pictures. He also displays a brilliant ability to oscillate a scene from chilling to hilarious to tragic on a turn of a phrase.
Movie Quality: 9/10

The print is presented in 1080p/AVC MPEG-4 with a 1.85:1 aspect ratio. Colors are bright and colorful throughout, except for one color that is missing from the palette, Red. Billy Bob Thornton is not a fan of the color, so it is one that was not used in this film. Blacks are deep in some scenes, while very soft looking in others. There is grain present in this print where it can be subtle in some scenes and heavier in others. I wish that both the blacks and grain was better controlled. Details are very good taking advantage of the jump to high definition. If you own the previous DVD edition, this will be well worth the upgrade.
Video Quality: 9/10

The audio is presented in DTS-HD MA Lossless 5.1 mix. This is what I about expected from ‘Sling Blade’s’ audio mix due to it being dialogue centric film. Dialogue comes peering through the center channel clear and crisp. The small issue that I did have was that the score and even some sound effects were rather light from the rears. This could have helped give the film a better audio experience.
Audio Quality: 8.5/10

‘Sling Blade’ is a really good movie that also put Billy Bob Thorton on the map in Hollywood. On Blu-ray the film comes with a nice dose of special features and the print quality is also very good which fans will want to upgrade. This film is highly recommended.
Overall Rating: 8.5/10