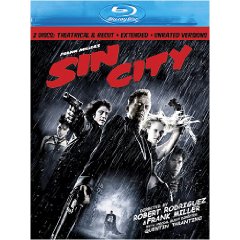 The two-disc edition of Sin City easily makes the earlier single-disc theatrical-cut release obsolete by including the regular theatrical cut on the first disc, recutting the movie into four extended segments on the second disc (separated by story line), then piling on an impressive load of bonus features. But there’s a catch. Billed as “Recut, Extended, Unrated,” with “over 20 minutes” of new footage, the new set’s four separate stories are extended by only about 6.5 total minutes of movie action (see details below in “What’s New”); the rest of the added running time is the splashy new title shots (named by the title of the story or book) and the four minutes of credits that run at the end of each segment. Each addition makes the movie even closer to the comic books, and these extended segments are generally preferable to the theatrical equivalents (unfortunately, there’s no Play All option), but don’t expect the same impact as Peter Jackson’s Lord of the Rings extended editions. And although this version is unrated, the only risqué addition is a bit of violence from Miho that’s no worse than the rest of the crazy violence in the film.

‘Sin City’ is a film you will either love or hate. There is a lot going on and sometimes it gets hard to figure out who is doing what but if you slip into the mode that is ‘Sin City’ is will all put itself together for you. ‘Sin City’ takes three stories and interweaves them throughout one another to create the appearance of one long story. The three stories used (‘The Hard Good-Bye’, ‘The Big Fat Kill’ & ‘That Yellow Bastard’) all feature some strong if not flawed characters that have a habit of making some very poor decisions. What is strange though is that we form attachments to these characters despite their behavior and we find ourselves rooting for them in the long run. You see, despite their flaws and transgressions they are victims themselves and warrant our support.

The acting is spot on for the type of film that this is. Robert Rodriguez brilliantly crafted a world that is so similar to the one Miller created frame for frame it feels like reading a comic, like peering into Miller’s graphic novels. The acting thus corresponds with this vision. The dialog is at times even word for word from the books, and the way the characters respond and or interact is classic comic exaggeration. It all comes together to create the perfect backdrop for the film.

Bruce Willis, Clive Owen and especially Mickey Rourke nail their performances, adding depth to the film as a whole. Jessica Alba actually pulls out her finest performance to date (who would have guessed it) and made me proud, and I think she’s nothing more than a hard body so she took me by surprise. Elijah Wood is effectively creepy, something I didn’t think he had in him, and his character stayed with me long after the credits were rolled. As a whole the performances are strong and are all memorable, Benicio Del Toro and Rosario Dawson coming to mind as key supporting players who make an impact.
Movie Content: 10/10

The print is presented in 1080p/AVC MPEG-4 with a 1.85:1 aspect ratio. ‘Sin City’ is a beautiful looking film that brings its unique artistic style to high definition that will make your jaw drop. ‘Sin City’ is a black and white film with a few colors thrown into the mix. The black levels are excellent providing an inky look with depth. There are a few colors used throughout the film with red being the more dominant color in the backdrop. It works very well here not taking away from the beauty of the black and white print. Flesh tones are accurate and natural. This brings us to the next point, details. Details are excellent throughout the entire film. This is where I think that black and white films shine, in high definition no matter the age of the film.
Print Quality: 9.5/10

The audio is presented in Dolby TrueHD 5.1 mix. This is an excellent mix that could easily sell those on the fence about the format. The soundfield is immersive at all times no matter if it is the special effects or dialogue. I was literally amazed with the amount of panning effects from each speaker in the rears. When there were gunshots It sounded as if there were bullets ricocheting off of the walls in the room. Bass was punchy. Dialogue is also well placed in the center channel sounding crisp and clear.
Audio Quality: 9/10

‘Sin City’ is an excellent film that may not be for everyone, but provides some excellent storytelling with interweaving story arcs. The film looks and sounds very good on Blu-ray providing the ultimate package for this film. My only disappointment is that the special features are only in standard definition. I highly recommend this film on Blu-ray and is well worth all the hype that surrounds it.
Overall Rating: 9/10