Posted in Blu-ray Reviews by George Theofanopoulos on 24 May 2012
Simply Red are one of the most successful British acts of all time with global album sales in excess of 50 million. Both the band and Mick Hucknall as a solo artist have been frequent visitors to Montreux across their 25 year career. This concert, filmed on July 15th 2003, was part of the tour in support of their multi-platinum album Home. It features several tracks from that album, including many of their biggest hits and best loved album tracks. 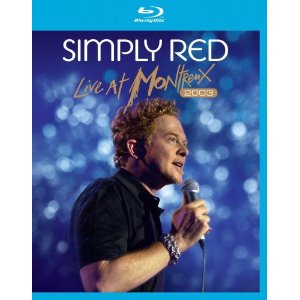 “Simply Red: Live at Montreux 2003” captures the band supporting their then latest studio outing, “Home”. Six of the tracks from that LP are included in this show’s set list, including a cover of The Stylistic’s “You Make Me Feel Brand New” that is one of the show’s two best moments. Given that the original song featured three different vocalists singing in three different vocal ranges, it’s a hearty challenge for one guy to perform the song – especially in a live setting. But, from note one, it’s clear that Hucknall’s multi-octave voice can handle all three vocal parts perfectly and that a sole singer can deliver a version that’s equally as good – if not better – than the original.

But “Holding Back the Years” – penned when Hucknall was a mere 17 years of age – is the show-stopper. Performed as the first song of the encore set, Hucknall wanders back onto a stage devoid of other musicians, slowly strumming an acoustic guitar. The two chords he gently plays are generic enough to be undistinguishable as any specific song – until he sings and, mid-way through, is joined by the rest of his band mates. In a day and age of “unplugged” renditions, this one avoids being cliché and stands out as a great reinterpretation of a timeless classic – and one that clearly demonstrates why Simply Red were one of the best bands to come out of the 80’s.

By the time this show was recorded, Mick Hucknall was the only original member left in Simply Red, but the 2003 iteration of Simply Red is comprised of a solid group of great musicians that work together flawlessly. The same line-up is featured on the Blu-ray’s closing segment culled from the band’s 2010 farewell tour. Unfortunately, only seven tracks from this show are included as not to double-up on any songs that appeared in the 2003 show.

Despite his immense vocal prowess, Hucknall has always proven that all one needs to lull the listener in with a vocal is one that is powerfully heartfelt and unpretentiously delivered. In that regard, he is – and Simply Red was – simply amazing.
Overall Rating: 8/10