Stephen King’s masterful werewolf novelette comes alive! In Stephen King’s thrilling adaptation of his novelette, Cycle Of The Werewolf, a peaceful town is suddenly terrorized by a maniacal killer. The townsfolk think a madman is on the loose, but a wheelchair-bound 13-year-old (Corey Haim, The Lost Boys) knows the truth … a werewolf is on the hunt. With the help of his Uncle Red (Gary Busey, Lethal Weapon), young Marty Coslaw sets out to stop the half-man/half-beast before he sinks his teeth into another innocent victim. Now, time is ticking … and the full moon is about to rise. 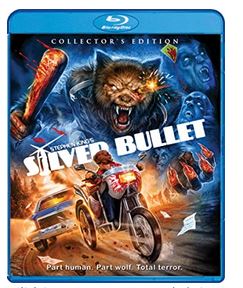 Stephen King’s Silver Bullet is one of the most charming werewolf flicks in the stable, one that combines adult orientated, gory horror with the fable-esque, childlike sensibility that seems to permeate King’s work. It’s also quite funny, thanks to the presence of a boisterous, rotund and quite young Gary Busey. Young Marty (Corey Haim) lives in a sleepy little town where not much of anything happens, until a rash of brutal murders occur in the area. Attributed to a serial killer by townsfolk, Marty has other ideas, specifically that a werewolf has taken up residence among them, and is snatching victims in the night. Taken seriously only by his sister (Megan Follows) and kindly Uncle Red (Busey) he bravely stalks suspect number one, who happens to be the creepy town priest (an intimidating Everett Mcgill). Things escalate into a series of gooey, effects driven set pieces that drip with wonderful 80’s schlock and awe, as of course is the tradition with anything based on King’s work. Other notables include Terry O Quinn, Bill Smitrovitch, Lawrence Tierney, King’s own son Joe Wright, and late great character actor James Gammon in an opening sequence cameo. It’s not all that scary, but more about the beloved tropes of such stories as these, the timeless monsters that inhabit them, as well the the intrepid young heroes whose lives growing up and finding themselves equally as important and high stakes as the horror elements.

The print is presented in AVC 1080p with a 2.35:1 aspect ratio. I have seen this movie across many formats and countless times that I have lost count. Overall this is a very solid transfer with many little improvements from the previous Blu-ray release which was a double feature and a stand alone. Colors tend to be stronger this time as they fit with the atmosphere. Where this film really shines with the Blu-ray release has to do with the details. I felt like the previous Blu-ray release was missing certain details that come through very well with this print. Black levels hold up very well providing some nice blacks since this is a very dark film as it takes place throughout the night. Fans of ‘Silver Bullet’ will not be disappointed the slightest considering that this film was even released on Blu-ray for a second time with a few updates.
Print Quality: 9/10

The audio is presented in a DTS-HD MA lossless 2.0 mix. The soundfield here receives an upgraded mix that helps expand the audio in a very dynamic way for a film from 1985. This is a very clean presentation providing a lot of panning from speaker to speaker with a lot of sound effects. While all of the chaos is going on with the wolf taking down victims, the dialogue is handled very well here. Dialogue is clear with no issues to report.
Print Quality: 9/10

Overall if your a Steven King fan, werewolf movie fan this film is worth watching. Or even a rookie in both then this film is a good place to start.
Overall Rating: 8/10