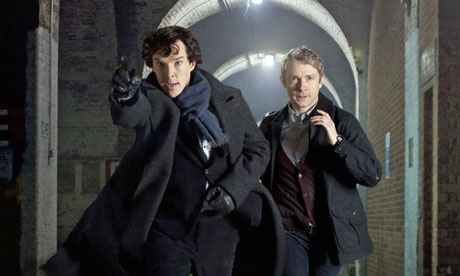 A contemporary take on the classic Arthur Conan Doyle stories, Sherlock is a thrilling, funny, fast-paced adventure series set in present-day London. Co-created by Steven Moffat (Doctor Who, Coupling) and Mark Gatiss, Sherlock stars BAFTA-nominee Benedict Cumberbatch (Hawking, Amazing Grace) as the new Sherlock Holmes and Martin Freeman (The Office, Love Actually), as his loyal friend, Doctor John Watson. Rupert Graves plays Inspector Lestrade. The iconic details from Conan Doyle’s original books remain–they live at the same address, have the same names and, somewhere out there, Moriarty is waiting for them. And so across three thrilling, scary, action-packed and highly modern-day adventures, Sherlock and John navigate a maze of cryptic clues and lethal killers to get at the truth. 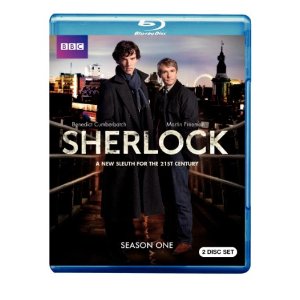 A proud man is ex-Army doctor, John H. Watson. But he is neither so proud nor his finances so sound that he’d turn his nose up at the chance to share rent on a flat, even if the flat mate should be that most peculiar and aggravating person, Mr. Sherlock Holmes. John Watson is immediately struck with the eccentricity of Holmes, and with his brilliance. And lest those Holmesian afficianados throw a fit, we first meet the Great Detective harshly applying a riding crop to a corpse in an effort to discover lividity, so at least we’re reassured that certain things remain the same. Holmes still conducts his nasty experiments. Lean and saturnine, he is still very much the detached thinking machine, still the cold fish, except that, striding thru modern-age London as he does, some people assume he’s a bit of a switch hitter.

Somewhere, Basil Rathbone and Nigel Bruce are nudging each other in the ribs. After all, they did this first. In these contemporary times, Sherlock Holmes wages war on ennui, rages against boredom. He fills a role as Scotland Yard’s unofficial consulting detective, a necessary tool in crime solving, even if the constabulary consider him a freakish prat. Some have wondered how Holmes would fare in the 21st Century, and the answer is: quite comfortably, thanks ever so. Holmes always was a scientific man, and very practical. Practicality dictates that Holmes would make use of today’s technology, and we see him here applying the Internet and his cellie and GPS trackers and so forth. He runs his own website: The Science of Deduction. It doesn’t get as many hits as John Watson’s blog which is where one can read up on Sherlock Holmes’ cases. To quote Holmes: “I’d be lost without my blogger.” Heh.

SHERLOCK Season One compiles the three 90-minute made-for-television movies that aired on BBC One in 2010. Steven Moffat, who now runs DOCTOR WHO, is one of the masterminds behind this new series and his name is enough endorsement for me. This is a very cool re-imagining of the classic detecting icon. Some of the mythos have been stripped away. Steal away from the gaslit Victorian age. Discard the Inverness cloak, do away with the deerstalker cap, and also the notion that Dr. Watson is an utter baffled-head. What’s left is the core of the detective and his fast friendship with the good doctor. Plonked in this contemporary era, Sherlock Holmes still runs circles around everyone. Only, as a nod to the sign of the times, the master sleuth has traded his pipe for heaps of nicotine patches. 221B Baker Street survives. But now it’s perched atop Speedy’s Sandwich Bar & Cafe.

The show works because of the casting choices. Benedict Cumberbatch makes a right proper Sherlock Holmes, even if his name sounds like J.K. Rowling made it up; Cumberbatch exudes idiosyncracy and that certain imperious air that makes you just want to kick him around the room a little. It’s spot on. Martin Freeman has the less showy role, but probably the more challenging role. It’s easy to do flash. Harder to play everyman and to still stand out. Freeman’s Watson is not at all dull-witted, is most capable as a man of action. He’s just not as good at sudoku as his flat mate. These two actors generate instant chemistry. They are compelling together.

The cases confound. The series comes rife with new material and a dark mood but with unexpected humor. There are nods to A.C. Doyle’s classic mysteries. “A Study In Pink” pits Holmes against a clever serial killer who talks his victims into killing themselves, and if you haven’t caught on to the word play in the episode title, this one is loosely adapted from “A Study In Scarlet.” “The Blind Banker” has Holmes doing a favor for an old school chum and investigating a break-in and a rash of graffiti. His sniffing around leads him to a locked room murder mystery and a circus. This case takes a wee bit from “The Adventure of the Dancing Men” (the graffiti as cypher sub-plot). Finally, in “The Great Game,” the world’s sole consulting detective plays a deadly cat-and-mouse game with a mad bomber who leaves deadlines and clues via his victims. This, even as Mycroft presses him to recover missing top secret government papers. This is very loosely based on “The Adventure of the Bruce-Partington Plans” and just a whiff, just a whiff of “The Five Orange Pips.” Throughout, there’s emphasis on showcasing Holmes’ dazzling deductive process.

Somewhere in all this, we meet Sherlock’s brother Mycroft who, as he says, “occupies a minor position in the British government” (but we know better). And in the shadows – pulling strings and simply being a sodding evil sod – sits the criminal genius Moriarty who, next to boredom (and, possibly, trivia about the solar system), serves as archnemesis to Sherlock Holmes. In “The Great Game” Moriarty and Holmes finally have a proper chat. The chat ends inconclusively.

Instead of simply being aloof, “Sherlock”‘s writers have gone a step further and made Holmes a self-described “high-functioning sociopath”. Although Sherlock is clearly thrilled at the prospect of a bloody crime spree in London, he’s not really a sociopath. He just doesn’t bother to hide his disinterest in people. He may fall somewhere on the shallow end of the autism spectrum, which is very 21st century indeed. But if Holmes were really a sociopath, he would be repulsive, so I’m not sure why the writers want to imply that he is. Then there is his brother Mycroft (Mark Gatiss), who is some sort of high-ranking intelligence officer and puppeteer. He seems more the sociopath.

Perhaps inspired by ongoing speculation on the part of Conan Doyle fans regarding the detective’s lack of interest in women, “Sherlock”‘s creators have chosen to make an issue of it. It’s not clear whether the writers intend to imply that Sherlock is gay or only that his acquaintances assume he is. But the main effect of this ambiguity is to create humorous situations when everyone assumes the same of Dr. Watson. Humor is one of this series’ strengths. I wasn’t sure what to make of it at first, but the humor and fast pacing got me. Not the stories. “Sherlock” shares with most modern mysteries impossible plots and motive-less crimes. Those are its flaws.
Movie Content: 9/10

This BBC presentation has the audience viewing modern-day London that is, of course, filled with texting on held hand cell phones, computers and void of horse-drawn carriages, long skirts along with Holmes’ hats, etc., but with a very young looking up-to-date Sherlock Homes type character living in the same flat that the original Sherlock Holmes supposedly lived in and solving some dastardly crimes in the Sherlock Holmes style.
Overall Rating: 8/10