Posted in DVD Reviews by George Theofanopoulos on 27 March 2010

Guy Ritchie (Snatch, RocknRolla) attempts to reinvent one of the world’s most iconic literary figures as an action hero in this brawny, visually arresting period adventure. Robert Downey Jr. is an intriguing choice for the Great Detective, and if he occasionally murmurs his lines a pitch or two out of hearing range, his trademark bristling energy and off-kilter humor do much to sell Ritchie’s notion of Holmes. Jude Law is equally well-equipped as a more active Dr. Watson–he’s closer to Robert Duvall’s vigorous portrayal in The Seven Per-Cent Solution than to Nigel Bruce–and together, they make for an engaging team. Too bad the plot they’re thrust into is such a mess–a bustling and disorganized flurry of martial arts, black magic, and overwhelming set pieces centered around Mark Strong’s Crowley-esque cult leader (no Professor Moriarty, he), who returns from the grave to exact revenge. Downey and Law’s amped-up Holmes and Watson are built for the challenge of riding this roller coaster with the audience; however, Rachel McAdams as Holmes’s love interest, Irene Adler (here a markedly different character than the one in Arthur Conan Doyle’s “A Scandal in Bohemia”), and Kelly Reilly as Mary Morstan, the future Mrs. Watson, are cast to the wind in the wake of Ritchie’s hurricane pace. One can imagine this not sitting well with ardent Sherlockians; all others may find this Sherlock Holmes marvelous if calorie-free popcorn entertainment, with the CGI rendering of Victorian-era London particularly appealing eye candy. 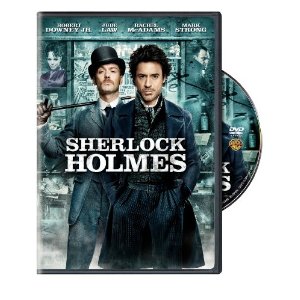 Nearly hundreds of actors have played Sherlock Holmes and his sidekick Dr. Watson, and it may seem rash to call Robert Downey Jr. and Jude Law the best Holmes-and-Watson-duo so far. But I’ve been a Sherlock Holmes fan my whole life, and most of the portrayals I’ve seen of the character only focus on an aspect or two of Sir Arthur Conan Doyle’s character. In Guy Ritchie’s film, as in Doyle’s “canon”, Sherlock Holmes is an avid boxer, a martial artist, an iffy musician, an opera lover, a dabbler in many sciences, and a master of disguise. Most importantly, he’s an expert in logic and deduction. He playfully torments his housekeeper Ms. Hudson (Geraldine James) and shares an antagonistic but symbiotic relationship with police Inspector Lestrade (Eddie Marsan).

The movie opens with Holmes and Watson apprehending serial killing Satanist Lord Blackwood (played broodingly by Mark Strong). Blackwood is executed, but when he seemingly rises from the dead, the deductive duo must determine whether it’s a supernatural occurrence or if there’s a logical explanation. It’s exactly the type of mystery Doyle would have devised, with plenty of twists and opportunities for Holmes to show off his genius as he races to stop a plot to take over England and (gasp!) America. Everything from the experiments Holmes performs in his Baker Street flat to his climatic revelation of the mystery on the Tower Bridge seems perfectly in line with Doyle’s writing.

One of the only departures from the canon that bothered me was Sherlock’s introduction to Dr. Watson’s fiancée, Mary Morstan, played as a delicate English rose by Kelly Reilly. In the stories, Mary was Holmes’ client in “The Sign of Four” before Holmes first encountered Irene Adler (Rachel McAdams) in “A Scandal in Bohemia.” Then again, the continuity of the stories was rarely important to filmmakers, or even to Sir Arthur, so I’m just nitpicking.

As a film on its own merits, “Sherlock Holmes” is almost perfect. The movie’s opening shot grabs you, and Guy Ritchie’s directing stays gripping all the way through the end titles. His version of Victorian London is moody and atmospheric. Hans Zimmer’s quirky score blends well with the film’s tone and Downey Jr.’s off-kilter Holmes. Meanwhile, Jude Law transforms Dr. Watson from the bumbling comic relief of most movies into a cool, competent sidekick. Perhaps owing to his own considerable acting chops, he’s the rare Watson who manages to be as interesting and watchable as Holmes. When he leaps into action, he relies on a sword-cane and a trusty revolver, while Sherlock favors a riding crop (which diehard fans will recall was his preferred method of self-defense in the canon). Rachel McAdams manages to tweak Sherlock’s classic adversary into a feisty action heroine. All the while, another familiar adversary skulks in the shadows.
Movie Content:9.5/10