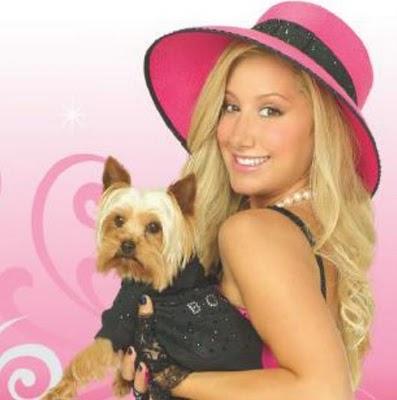 After a talent scout spots her performing with her dog Boi at a charity gala, Sharpay Evans (Tisdale) sets off for the bright lights of NYC, convinced instant fame and fortune are in the bag (designer bag, that is). But theatre’s a dog-eat-dog world, as she and Boi discover when they encounter the devious owner of a pampered pooch named “Countess” and a scheming Broadway starlet who will do anything to crush the competition. Fortunately, Sharpay also meets Peyton (Austin Butler), a handsome student filmmaker who finds Sharpay nearly as fascinating as she finds herself.

Breaking a comic villainess out on her own can be risky unless you have the perfect script and balance. Ashley Tisdale does her best, but there is only so much she can do with what she has been given here. She is more than capable of being the lead in a feature, but unfortunately, Disney has done her a disservice with (what appears to be) a quickly slapped together production. The predictability of the plot doesn’t bother me (think “All About Eve” meets “Legally Blonde”); what does bother me is how poorly it’s done (think “Legally Blonde 2”).

The plot has Sharpay being presented with an opportunity to star in a Broadway play; against her father’s better judgment (he feels she isn’t capable enough for something so big), she seizes the moment and goes anyway, promising to return if she doesn’t become a success in 30 days. Trouble begins when she’s thrown out of the penthouse apartment that daddy arranged for her (no dogs allowed!) and only gets worse when she discovers that the Broadway play was only interested in her dog, Boi.

Boi has competition; a snooty little rich boy, Roger Elliston (Bradley Steven Perry) has a female dog, Countess, that they are interested in as well. And let’s not forget the star of the show: Amber Adams (Cameron Goodman), a two-faced nasty diva who turns Sharpay into her personal toilet-bowl scrubbing assistant, giving Sharpay false hope that Boi might be picked over Countess. Helping her make lemonade out of these lemons is Peyton Leverett (Austin Butler), a handsome young man whose parents are friends with Sharpay’s family. He just happens to know of an available studio apartment in his building AND just happens to be the perfect cheerleader who falls head over heels for Sharpay. Will Boi get chosen? Will Sharpay get her dream within 30 days? Can Sharpay put aside her ambitions and snobbery and find love with Austin?
Movie Quality: 7/10

The print is presented in 1080p/AVC MPEG-4 with a 2:39:1 aspect ratio. I found this print to be rather eye pleasing with vibrant colors. Fleshtones are very natural and accurate, considering that we see a few bare necessities throughout. Black levels are solid throughout. The image was also sharp with excellent details. The image is clean and pristine making this a very nice looking image.
Print Quality: 9/10

The audio is presented in a DTS-HD MA lossless 5.1 mix. This film is a dialogue driven film. Dialogue was clean through the center channel with a nice degree of depth. I never had to raise or lower the volume to make out what was being said. The soundfield does get a few effects into play, but nothing major. The soundtrack takes advantage of the soundfield with audio also pouring through the rears.
Print Quality: 9/10

I had high hopes for this movie – my young daughters LOVE Sharpay, but we all lost interest about halfway through and we had to keep reminding the girls to watch. After having watched the HSM trilogy about a million times, we wondered: The plot takes place only a few months after graduation (a bit of a stretch), why didn’t she stay with or call her twin, Ryan – didn’t he get a scholarship to Juillard?. Things like that just do not make sense in this film.
Overall Rating: 8/10